A Little Goes A Long Way

He may have been the smallest player on the football field, but he made a big impact at the Colt McCoy Football Camp. Seven-year-old BBBS Little Brother Dajuan Jessie impressed everyone as he competed with 16-year-olds and came away with the #1 Draft Pick award at the camp this past July.

“On the first day of the camp I was sitting up in the stands when they announced they were going to select someone as the #1 Draft Pick,” said Joel Luton, Dajuan’s Big Brother. “I thought, ‘I wonder who’s gonna win that.’ And only two hours into the camp, out of approximately 200 students, they chose Dajuan.”

“In one game I just went up the middle and they were trying to get me but I stiff-armed them and slapped their hands away,” Dajuan continued, reliving the moment. When his grandmother asked if the other players could catch him, he replied simply, “No.”

People who know Dajuan are not completely surprised. Match Support Specialist, Rah-Taja Doggett, who supported Joel and Dajuan’s match said, “Dajuan may be small in stature, but he is very fast. He’s also very smart with a very high reading level and he’s been playing in the city league since he was five.”

Plus, he just loves football, which also makes him a perfect match with Joel. “When I interviewed to be a Big I asked to be matched with a younger kid who was active, liked sports, and had a sense of humor,” Joel said. The two have hit it off perfectly, spending time going to UT baseball games, UT football scrimmages, and even going bowling.

“They put the bumpers up when we went bowling,” Joel added. “Dajuan had never bowled before and he was really pleased that he was beating me.”

Joel says that he can see that competitive spirit in Dajuan when he participates in anything and that it’s part of what helps the youngster succeed. “He takes (football) very seriously,” Joel explained. “Dajuan was one of the smallest kids at the camp, but he was the one who caught a bunch of passes in a row.”

During the camp the players were placed on teams and in divisions by age. There were five teams in Dajuan’s division and his team won all their games and received a gold medal. “I asked him if he was the reason they won,” Joel said “and he confidently said, ‘Yes.’”

Dajuan also applies his competitive spirit to his academics: on his most recent report card he scored all A’s.

He participated in the Colt McCoy Football Camp with tickets donated to BBBS. “When BBBS offered the camp openings to any match that wanted to participate, I jumped at the chance,” Joel said.

Joel got involved with Big Brothers Big Sisters over 20 years ago in Houston when he took over a match for a friend who was being transferred out of the country. He eventually had to move and end the match himself. A couple of years ago, however, when he retired in Austin, he began to think about what he wanted to do with his time. He knew he wanted to volunteer and, being familiar with BBBS, he signed up to become a Big.

“I took Dajuan to a UT scrimmage. He had never been in DKR Texas Memorial Stadium and he was just entranced by it,” Joel said. “This is what I enjoy most about being a Big Brother…. seeing these things, the stadium and the football players, through the eyes of a kid. Seeing that excitement.”

Dajuan’s sense of humor is something else Joel enjoys. The two were on one of their first outings riding around in the car when Dajuan told Joel that his grandfather had passed away and that he was an angel in heaven. He then asked about Joel’s parents. “I told him my father was in heaven too but that my mother was still alive and that she was 96 years old. And there was this pause in the conversation and Dajuan said, ‘That’s just not right,’” Joel laughed. “I told my mother and she got a chuckle out of it too.”

The Texas Longhorns are Dajuan’s favorite team right now and he hopes to grow up to play for them. “I want to be a football player when I get bigger,” Dajuan said. “And I’m gonna play in the NFL. But when I play in the NFL I’m gonna get hit.”

He may get hit if they can catch him, but Dajuan is already showing he’s got the skills to pursue his dreams and come out ahead. 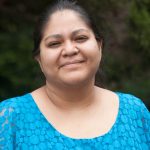 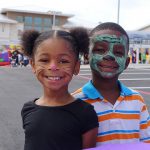