Take a moment to recall the different mentors you’ve known, those people who took time to teach you a skill or life lesson, who really listened to you, who inspired you, or who were always there for you. We’ve all had mentors in our lives.

Big Brothers Big Sisters of Central Texas’ mission is to help children succeed in life. We do this by pairing children with caring adult volunteers who serve as role models, mentors and guides. These mentoring relationships are transformative and life-changing for children, for adults, and for the community.

January is National Mentoring month: a time when we celebrate those who donate their time and energy to provide opportunities and care for others.

“National Mentoring Month allows us to celebrate the incredible impact and power of mentoring,” said Joe Strychalski, BBBS’ Vice President of Programs. “We use this time to recognize and thank our current Big Brothers and Big Sisters for their involvement and to raise awareness of the need for even more individuals, community groups and businesses to engage in this life-changing work.”

“It’s been a 7-year adventure,” Meredith said of her match with Little Sister Takeria. In the beginning, she recalled sitting across from her future Little Sister and wondering what she might have in common with the shy 8-year-old she had just met.

It turns out that the two have had a lot in common. They have shared a lot of “firsts” together, such as Takeria’s first hayride and first baseball game. They have also enjoyed running errands, baking and simply hanging out at Meredith’s house. “Takeria even helped me transport a scared dog from one animal shelter to another through my role as a volunteer at Austin Pets Alive,” Meredith added. “When I pick her up and include her in my activities, it makes them much more fun!”

Takeria agreed. “Just spending time with Meredith in general is the best,” she remarked. “I never knew that having a Big Sister would be such an amazing experience.”

Takeria has always introduced Meredith as her Big Sister. When the two met at Takeria’s middle school for lunch one day, a little boy looked at Meredith with surprise when Takeria said she was her Big Sister and said, “But you’re not black!” Takeria just laughed and went on with her conversation. “Nothing fazes her – I mean nothing!” Meredith joked.

Meredith attributes this year’s Big of the Year award to Takeria as much as to herself. “Without her eagerness and dedication to spending time with me, I would not have been nominated for this award, The greatest accomplishment in my life is being a Big Sister. This adventure with Takeria is priceless. I am confident it will never end.”

Jeremy Giroir sees his match continuing long after his Little Brother Dylan has graduated from high school as well. “From the very first time I met Dylan I felt like he was family,” Jeremy said. “Although Dylan was very shy at first, it didn’t take long before I saw his eyes light up with curiosity and his playful jokester spirit come out. To say that he quickly became part of my life is a gross understatement. Hanging out with him is not something I feel like I “have” to do, or that I’m “supposed” to do, it’s something I GET to do.”

One of the other things Jeremy gets to do is to see the world anew through the eyes of his Little Brother, whether playing basketball and football or visiting a college campus. “Some of my favorite conversations with Dylan involve talking about what he wants to be when he grows up, or what college he wants to go to,” Jeremy continued. “It’s beyond refreshing to see his confusion turn into excitement when he realizes that he can choose his path in life.”

Jeremy sees this simple interest in a child’s life as being the key difference between kids who have dreams of successful futures and those who don’t. “A child’s excitement about the future is like a light bulb that can only be illuminated by someone who genuinely cares about them and who is willing to spend the time and effort to help them turn it on,” Jeremy said. “Being part of an organization that allows these connections to happen is a no-brainer for me. I can’t say enough about the Big Brothers Big Sisters program. I think it truly changes the world one relationship at a time.”

Dylan also values his relationship with Jeremy. “Jeremy is a good role model,” Dylan remarked. “Because he helps me, I want to help people too. When I say my prayers at night I pray that everyone can have a Big Brother like me. Jeremy is a great friend and I tell everyone he is the best Big Brother ever!”

In addition to a Big Brother and Sister, this year a Big Couple of the Year has also been selected – Vanessa Ordones and Dixon Hankins. They have been involved with BBBS for over six years.

Vanessa and Dixon have become like family to Little Brother Fred. They have cheered him

on at sporting events, played games together and helped him focus on his academics and future aspirations. Early in their match, Fred was in attendance when Dixon earned his Master’s degree from the University of Texas. This sparked a growing interest in higher education and Dixon and Vanessa recently cheered Fred on in turn as he walked across the stage to earn his high school diploma. Fred is now utilizing his BBBS scholarship as a freshman at Lamar Technical Institute in Beaumont.

With such exceptional examples of all that mentoring can do, National Mentoring month reminds us of those who’ve impacted our own lives, and inspires us to ‘pay it forward’ by providing time, care, support and opportunities for others. 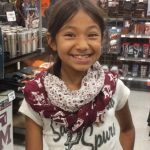 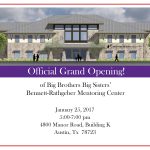