BB&T: The Gift of Giving

It’s amazing what a little enthusiasm can do. No one knows this better than Branch Banking and Trust Company (BB&T), one of Big Brothers Big Sisters’ corporate partners and the Diamond Sponsor for the agency’s Ice Ball gala for the second year in a row.

“We believe in BBBS’ mission,” said Blake Absher, BB&T’s Austin Market President and a former Big Brother. “We know that BBBS’ mentoring model works. As an organization, we want to be more than BBBS’ Diamond Ice Ball Sponsor. We want our employees to be involved with, and invested in, advancing the agency’s life-changing work.”

It is this goal that inspired BB&T to organize a summer-long, city-wide competition amongst their branches to see which one could raise the most money for Big Brothers Big Sisters. The campaign began in May and will run through mid-August. “We’re very competitive,” laughed Cathy Haines, BB&T’s Retail and Small Business Leader, a former Big Sister and the person overseeing the organization’s fundraising initiative. “Our employees have really taken ownership of this effort and they have organized a lot of different activities, from selling candy bars at the branch offices to raffling off gift baskets.”

Employees have also taken their fundraising efforts to Business Network International (BNI) gatherings where they have talked about Big Brothers Big Sisters and made pitches for contributions, and they have coordinated happy hour events where a portion of the tab has been donated to the campaign.

One BB&T employee who attended Ice Ball last year has taken her fundraising efforts to new heights by creating a personal email campaign that she distributed to all of her clients. “Susan has really been a driving force behind this initiative,” Cathy remarked. “Other employees have been inspired by what she’s done. She will probably be our top individual fundraiser this year.”

“It’s been fun to see this campaign snowball,” Blake added. “The excitement is contagious. Last year our employees raised $10,000; this year, we’re on track to raise significantly more than that.”

But raising funds is only part of what this effort has achieved. BB&T’s city-wide campaign has raised awareness of Big Brothers Big Sisters’ work within the organization and within the community, created a greater sense of camaraderie among employees, and allowed employees to make a positive difference for children and families in Central Texas.

“By fundraising in this way, every associate in our organization has contributed to BBBS’ mission, and in doing so, they have helped to make the community a better place for us all,” Cathy said. “There’s a real sense of pride in that.”

Moreover, this effort exemplifies BB&T’s mission as an organization. “A lot of companies have giving back to the community as part of their mission statement,” Blake added. “Implementing this campaign has allowed us to ‘walk the walk’ and put our values into action. It has given our employees an opportunity to be part of something bigger than themselves and to experience the difference their actions can have in the world.”

Several BB&T employees will also have the opportunity to see the impact their efforts have made by attending Ice Ball. The two BB&T branches that raise the most money in the campaign will receive two Ice Ball tickets each, along with a hotel suite. The branches can then bestow these prizes on one employee or split them between two employees. “It’s really competitive because our employees all want to go to Ice Ball,” Blake explained. “And that is really neat to see. Attending Ice Ball is a reward for championing and advocating a cause that is near and dear to us. When employees attend the gala they get even closer to BBBS’ mission and they get to be part of a larger community of individuals and organizations who are also there to support the agency’s work. And it’s such a great event.”

For employees who have families or who live in outlying areas and can’t be Big Brothers or Sisters themselves, BB&T’s fundraising campaign gives them another means of contributing to BBBS’ work in a meaningful way.

“When you see all that is happening in the world, all these horrific events, you wonder if a positive influence or a mentor in someone’s life could have changed the outcome,” Blake said. “As former Bigs, Cathy and I have both seen the positive impact mentoring has on kids. In banking, we’re not in the business of saving lives, so for us to give back, to see that good in the community and to know we’re helping current and future generations – that means a lot to us.” 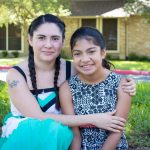