It was a beautiful day on the water as Bigs and Littles got to exercise their “sea-legs” at Big Brothers Big Sisters of Central Texas’ 2018 Hobie Day. Approximately 100 matches showed up at Bob Wentz Park on Lake Travis to experience the unique adventure that is catamaran sailing courtesy of the Austin Cats, a group of sailing enthusiasts who have hosted the event for close to 40 years.

Big Brother Jeff and his Little Brother Caden had a great time at the event. “We enjoy just being out on the lake, learning more about the Hobie Cats, and sailing in general,” said Jeff. “And Jim, our guide, did an awesome job of explaining everything. Caden even got to do some trampolining, where you hang over the side of the Hobie Cat. It was amazing.”

Many of the matches just enjoyed having a chance to be outdoors and enjoy the water. “Caden is really a gamer kid. He likes video games. So, any time we can get outside, we want to take advantage of it,” said Jeff. “We appreciate BBBS having this event, and the Austin Yacht Club, and the Austin Cats crew, that puts it on. We’ll be back every year that we don’t have a conflict.”

Other Bigs and Littles, like Christina and her Little Sister Isis, saw the day as an opportunity to have an adventure. “It’s our first time to be at Hobie Day,” said Christina. “It’s just nice to have this event and to have it on these boats. We’re excited to have the opportunity to go on an adventure like this together.”

It was an adventure Isis wasn’t totally sure about at the beginning. “I’ve never been on a boat before,” she said, “but I think it is going to be cool and I’m only a little bit scared.”

Following the ride, Isis was all smiles as she struck a victory pose when she got off the boat. She couldn’t stop talking about how fun and relaxing it was riding across the lake, and how much she enjoyed using a squirt gun to shoot water at her brother who was in another boat.

The Austin Cats supplied five catamarans for the rides throughout the afternoon. They also spent time preparing for, and hosting, the event.  In addition to the boat crews, the Young Men’s Service League Westlake Chapter and Cavalier’s Chapter provided volunteers who helped with tasks like equipping attendees with life jackets, assisting people as they got onto the boats, and cleaning up after the event.

“This is my first time volunteering with BBBS and already, in just the 1 ½ hours I’ve been here, what I’ve seen of the Bigs’ and Littles’ relationships is precious, more than precious,” said Michelle Hogan, of the YMSL Westlake.  “It is special to see all these Bigs spending time with children who need an extra loved one in their lives.”

For one match, Hobie Day 2018 marked the ten-year anniversary of their match relationship. Tom and his Little Brother Jordan spent their first outing as a Big and a Little at a Hobie Day event 10 years ago. “When we were first matched Jordan was 6-years-old and he was a tiny, little guy,” said Tom. “In the picture I have from that time, I had to bend down to be beside him in the shot. Now, ten years later, he’s about to be taller than me.”

“I used to be scared of the water,” said Jordan. “but I’m not scared any more, so today will be fun.”

Tom said that, early on, he tried to take Jordan swimming for some of their outings, but that he wouldn’t swim. “In year two I could see that he had decided, ‘I’m going to do this,’ and now he’s a great swimmer,” said Tom. “I don’t think we’ve missed many Hobie Days.”

Hobie Day is a BBBS event where Bigs and Littles get to spend time with the Little’s family members as well. In addition to sailing, attendees enjoyed swimming, eating pizza, playing games and lounging along the shoreline.

See photos from the day in our 2018 Flickr album here 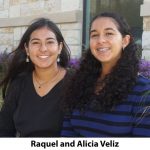 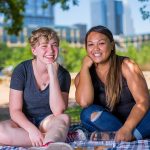