Work has begun on the second story of the BBBS Bennett-Rathgeber Mentoring Center. As the new building takes shape, it represents the next chapter in BBBS’ story as well. Few people understand this as well as Joe Morales whose own personal history, growth and development are deeply entwined with those of the agency.

As a former Little Brother, a former Big Brother and a former BBBS board member, Joe has a unique perspective on the transformative power of BBBS’ work and the positive impact the new Mentoring Center will have. “I know how BBBS changes lives,” Joe said, “because I’ve lived it. I’ve also seen BBBS grow over the years, and I can hardly wait to see all the things the organization will be able to do in this new space.”

Joe’s involvement with BBBS began when he was 11 years old, three years after his father had left the family. “Thank goodness my mother saw a flyer about Big Brothers Big Sisters and had the foresight to know I needed a positive male influence in my life,” Joe recalled. “I was at an age where I was starting to talk back and get a bit rebellious.”

Joe entered the program reluctantly, telling his mother that he didn’t want a Big Brother. In retrospect, however, he acknowledges that becoming a Little Brother changed the trajectory of his life.

“When I started, BBBS was located on W. 7th street in the old Caritas building, a two-story building with a winding staircase,” Joe said. “The main thing I remember was that staircase and how creaky it was. But, I really liked that building.” It was there that Joe and his mom attended BBBS meetings and there that he was matched with his Big Brother, Dave.

“Talk about somebody who was a great role model,” Joe continued. “Dave was a graduate of Notre Dame. He was getting his masters at UT, worked at IBM, and was married.” Despite these credentials, Joe was not impressed with his Big Brother at first. “I remember thinking, ‘Who is this guy? He’s not my father. What is he going to do with me?’”

“And I gotta tell ya,” Joe chuckled, “When I think back on what Dave has done for me, it’s amazing.”

The two spent a lot of time playing tennis and basketball, going bowling, watching movies, or occasionally just sitting and reading books. Dave taught Joe how to play chess. “And he had a boat,” Joe laughed. “The fact that a kid from the east side of town could actually go to Lake Travis and be on a boat for the afternoon was really cool. And these are the types of things BBBS does. The agency takes kids out of their environments and opens up other worlds for them.”

Joe’s favorite times were the Sunday evening dinners Dave and his wife prepared. “I’ll never forget… one day we were standing in his backyard. Dave was grilling burgers. I was looking around and I said ‘Dave, this is a really nice house. I don’t think I will ever have anything like this,’” Joe said. “And Dave told me, ‘Joe, you can have a house like this. You just need to remember three things: whatever you do, get your education; whatever you do, try to be the best; and stay out of trouble, whether it’s with your mom, the school, or the law.’”

Many years later, Joe became a Big Brother. He was in his backyard barbequing with his own Little Brother. “My little guy told me, ‘Joe, you have a really nice house. I’ll never be able to have something like this.’” At that point, Dave’s words popped into Joe’s mind and he passed along the guidance he had received so many years before. “That’s the kind of impact this organization can have,” Joe said. “Those three things sound so simple, but they are so true.”

Joe saw this truth play out as a young man, at about 14 years old. He began running with the wrong crowd, one bent on vandalism and destruction. After a particularly close call with the police, Joe had an epiphany. He wondered what would have happened if he and his friends had been arrested. “My first thought was not ‘What would my mother think?’ but ‘What would Dave think?’” Joe admitted. Consequently, he broke off his friendships with those boys and changed his ways because, he said, “I didn’t want to lose Dave.”

Three years later Joe learned that a woman from Austin had been abducted and killed. When the authorities captured the killers, it turned out that three of the four were guys Joe had been hanging around with as a freshman. “If it hadn’t been for my mom, BBBS and Dave, I could have been in that group,” Joe said.

Joe’s relationship with BBBS evolved again when he became part of BBBS’ board in the 1990s. “My experience on the board taught me just how much work goes on at BBBS behind the scenes,” Joe explained. “I was impressed with the organization’s level of commitment and its drive to serve more kids.”

Construction of the Bennett-Rathgeber Mentoring Center is another step forward for BBBS, and it’s one that Joe is excited about. “I’ve seen BBBS grow from a three-caseworker, local, homespun office to the professionally run organization it is today. Over the years, I’ve watched the agency go from one building to another as they’ve outgrown the space, because the need is so great,” Joe said. “BBBS’ need for a new building is something that’s been talked about since I was on the board. This new facility is going to be state-of-the-art. I can’t wait to see the finished product. This organization has done so much with so little. The impact BBBS will have going forward will be tremendous. The future looks so, so bright for BBBS and for the community.”

With the completion of the building in sight, Joe is contemplating taking his relationship with BBBS to the next level as well. He’s considering becoming a Big Brother again. “I do get emotional when I think about the impact of Big Brothers Big Sisters,” Joe admitted, “because I know where I would have ended up without the organization. The beauty of it is, I’m here… talking about BBBS and watching the organization grow so that it can have that life-changing effect on even more children and families.” 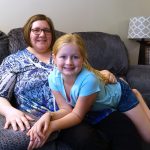