“Having been involved with Big Brothers Big Sisters of Central Texas for over 25 years, I am truly honored to receive this award with my wife Laura,” said Kyndel, who has been a Big Brother twice. “We both believe strongly in the mission of BBBS and know that it works. I’ve been fortunate to have had the time to give back to the greater Austin community in many ways. However, one of my greatest satisfactions in doing so was as a Big Brother. I think I learned more about life from my Little Brother than he did from me.”

The Bennetts’ journey with BBBS started when Kyndel became a Big Brother while working as a construction superintendent at Newmark Homes in Austin. The pair moved to Chapel Hill North Carolina where Kyndel completed business school, and then moved to Raleigh, where Kyndel joined the local BBBS board, ultimately overseeing a merger between the Raleigh and Durham BBBS agencies.

Upon returning to Austin, it seems they were destined to remain connected with BBBS. “After we had moved back to Austin, one of the North Carolina BBBS board members ran into a BBBS of Central Texas board member at a national conference. They said, ‘Hey, you need to get Kyndel involved in the local agency, because he’s not doing anything,” laughed Kyndel. “So, I ended up on the BBBS board here in Austin.”

Kyndel is a former chair of BBBS’ Executive Board and served as chair of BBBS’ 2016 campaign to build the Bennett-Rathgeber Mentoring Center; a building project in which he has not only served as a leader, but one to which he and Laura were major financial contributors. “I saw the great work the agency was doing,” said Kyndel. “I really saw the difference it made in kids’ lives, and I knew the agency needed a larger space.”

“I had a lot of great mentors growing up, and still do today,” Kyndel added. “So, I value the whole concept of mentoring. I know what a difference it can make.”

This belief in mentoring also lead to their involvement in Ice Ball. “When we first became involved with Ice Ball it was a small event,” said Laura. “But now, it is one of the highest-grossing galas in Austin, and that says a lot. We connected with Ice Ball because we believe so much in this organization.”

The Bennetts’ focus has been on bringing new guests to the gala to learn more about the organization’s mission. “It’s an important night because people get to hear the message, and you all do an extremely good job of portraying what the organization does,” said Laura. “Guests never leave wondering what the mission is. We have often had guests lean over and say that they want to become Bigs, as well as donors.”

Laura and Kyndel do what they do because they love the community and want to give back. “We are not involved to win awards. We do it because we love this city,” said Kyndel. “We have been blessed financially, and we want to help others.”

“Giving back is a learned thing,” said Laura. “You have to come to the realization that ‘yes, we do have enough to give, and it is going to make an impact in the world.’ And the truth is, the easiest way to make an impact is to fund an organization that has already figured out the work that needs to be done.”

They stress that any amount can help. “Sometimes, when a group is trying to raise $2 million and you only have $25 to give, it can be overwhelming,” said Laura. “And you think, ‘What’s the point?’ But when you look at the numbers, lots of fundraising campaigns are comprised of 2,000 twenty-five-dollar gifts.”

“You don’t have to be a Rockefeller to be a philanthropist,” Kyndel agreed. “You just need to give your time and some of your resources. It doesn’t have to be a lot. Just make a difference, and you’ll find it’s extremely rewarding when you do.”

Like the fast-spreading Ice VII mineral for which this award is named, the Bennetts’ impact has been felt for many years at BBBS and by so many connected to the agency. “It is so special to receive this award,” said Laura. “We have worked with many really, really, good people through this organization. People who want to do good things in the world. It is an honor to be recognized by BBBS and all these wonderful people.”

“BBBS helps so many kids in a deep and long-lasting way,” Laura continued. “It’s an important mission, and you fulfill it really well. That’s why we’ve been involved for so many years.”

It is our honor to present Laura and Kyndel Bennett with this year’s 2022 Ice VII award in recognition of the tremendous impact they have made, and continue to make, for BBBS, for the Ice Ball gala, and for children and families in our community. 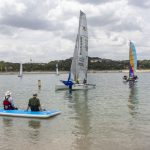 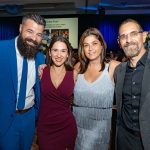