BBBS Presents Scholarships to Over 400 Students

Encouragement and possibilities were the themes as Big Brothers Big Sisters of Central Texas promised and awarded almost $900,000 in college scholarships to more than 400 students at the agency’s 30th Annual Promising Futures Scholarship Ceremony on Saturday, June 11. Held at the For the City Center, the event featured Mayor Steve Adler as the keynote speaker. He addressed his remarks to an audience made up of students, families and mentors.

“I am a first-generation college student,” Adler told the graduates, many of whom will be the first in their families to attend college. He congratulated the students on their academic achievements and encouraged them to look to their successes and to believe in themselves when the going gets tough.

Over $410,000 in scholarship funds were made available to BBBS’ graduating seniors, and younger students were promised $480,000 in funds to be used when they graduate from high school.

The scholarships will be used at a variety of institutions and vocational schools including the University of Texas at Austin, Berklee College of Music in Boston and Bennington College in Vermont. This year’s graduates are pursuing fields including nursing, music, veterinary medicine, business, computer coding, physics, biology and medicine.

“It is incredible to see the positive impact BBBS’ Scholarship Program has on our kids. It helps them achieve feats many of them never thought they could, and it opens the door to new opportunities.” said Brent Fields, CEO, Big Brother Big Sisters of Central Texas.

Students walked across the stage to receive their awards and posed for photos with dignitaries following the ceremony. Lauren Petrowski of Fox 7 Austin was the emcee for the event, and speeches were given by Mayor Steve Adler, BBBS of Central Texas CEO Brent Fields, BBBS Executive Board Member Jamie Avila and former Little Sister Keyanna Maxwell.

About the Scholarship Program: In 1986, Big Brothers Big Sisters of Central Texas received a contribution from an anonymous Central Texas donor to establish a program encouraging Little Brothers and Sisters to complete high school and pursue post-secondary education. The program was the first of its kind throughout the nearly 350 BBBS chapters. Since 1986, Big Brothers Big Sisters has promised nearly $5 million in college scholarships to 2,500 Little Brothers and Sisters in Central Texas. 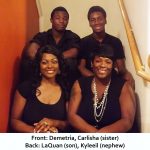