Sparkling lights, ice sculptures, an elegant setting, fashionable gowns, exotic auction prizes. It’s easy to get caught up in the dazzling event that is Big Brothers Big Sisters’ Ice Ball Gala. But Ice Ball Chairs Kate and Hector Perez look beyond the glamour to focus on the heart of the event: raising money to help BBBS provide mentoring services to more children in Central Texas.

This civic-minded couple is involved with a number of non-profits, but BBBS has captured their hearts. Hector originally got involved with BBBS as a Big Brother and, several years later, he got Kate involved as well. “I came from an economically disadvantaged background in San Antonio,” Hector said. “Growing up, there were times in my life when having a male mentor and role model would have been very helpful.”

It was BBBS’ reputation and Hector’s desire to establish a one-to-one connection with a child that motivated him to become a Big Brother in 2010. “I thought, if I could have a relationship with one child, for an extended time, I could have an impact on that child,” Hector recalled. “When I became a Big, I was surprised to discover how much being a volunteer affected and benefited me too.”

Hector was matched with his Little Brother Gabriel six years ago. Their relationship is such an important part of his life that when he and Kate planned their wedding, they both knew that Gabriel would be involved. “Hector and I are both from big families,” Kate laughed, “but when we got married there was no question who our ring bearer was going to be. It was Gabriel.”

Since becoming a Big, Hector has contributed to, and been involved with, Big Brothers Big Sisters in many different ways. He was named Big Brother of the Year in 2014, has the distinction of having raised the most money as an individual donor for BBBS’ annual Bowl for Kids event, and serves on BBBS’ Board of Directors and Scholarship Board. Kate became involved with the agency as well after attending BBBS’ 2014 Ice Ball gala.

“We have a strong interest in helping non-profits succeed,” Kate said. It is this interest that prompted them to join the Ice Ball Host Committee in 2015, recruit others to help with the event, and ultimately become Ice Ball 2016 Host Committee Chairs – a job that comes with a lot of responsibility and a lot of work.

“Making Ice Ball a success is a group effort,” Kate explained. “It takes sponsors, staff, donors, volunteers, and friends. This event wouldn’t be what it is without a team. I give credit to everyone who is working behind the scenes to prepare for this year’s gala. We’re grateful for their involvement.”

Contributing to non-profit events is not an unusual pastime for the pair, as they are involved with many community organizations. Kate is on the board and is involved in fundraising for Ballet Austin, the Texas Young Masters Foundation, and the Blanton Museum’s ‘Art on the Edge’. She and Hector have also started a special organization to help veterans transition from the military back to civilian life.

Ice Ball, however, is special. “Ice Ball is so different from other events,” Kate remarked. “It has such positive energy and support. The laughter and cheering that occur when an auction item brings in a record amount is so much fun to experience.”

But it’s the gala’s overarching mission that really inspires this couple – raising the funds needed to provide mentoring services to more kids in Central Texas.

BBBS currently serves approximately 1,000 children each year, but for every child who is matched with a Big Brother or Sister, there is another child waiting to be matched with a mentor of their own. Funds raised through events like Ice Ball allow the agency to hire the staff needed to make and support more mentoring relationships.

“We know first-hand how hard it can be for a child who is waiting to be matched with a Big Brother or Sister.” Hector said. “Gabe’s brother, Trey, was on the waiting list for quite some time. That’s why we do Ice Ball. To make mentoring relationships possible for even more kids.”

Though the couple contributes a great deal of time to local non-profits in addition to their regular jobs, they do have some down time. Hector is a runner and has competed in 4 marathons. “We love to travel and to experience new cultures,” Kate added, “And we enjoy entertaining and spending time with family and friends.”

Their Little Brother, Gabriel, has become a part of their extended family, just as Kate and Hector have become a part of Gabriel’s family. One of Hector’s proudest moments was when he received a compliment from Gabe’s older sister. “She said ‘Thank you for helping my brother become a man,’” Hector recalled. “Hearing that told me that I was having an impact on Gabe’s life. That was a very special moment for me.”

And, at the end of the day, creating more relationships and moments like these, is what Ice Ball is all about. 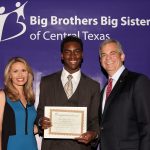 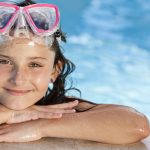