It’s been 3 years since BB&T bank signed up to be a Diamond Sponsor for Big Brothers Big Sisters’ Ice Ball gala. During that time, the company has not only seen BBBS grow and change, the company’s relationship with BBBS has grown and changed as well.

“Three years ago, we were looking to further support the community by partnering with an organization that aligned with our values, and whose mission fit well with BB&T’s mission – part of which is to make the world a better place to be,” said Blake Absher, BB&T’s Austin Market President and a former Big Brother. “BBBS was near and dear to us. We liked that funds raised for BBBS would go back to our community and to supporting youth.”

The relationship between BB&T and BBBS proved to be a perfect match and each year BB&T’s impact on, and support for, BBBS has grown. Over the past three years, the company has increased annual donations for the Ice Ball Gala through an employee-led fundraising campaign, spread the word about BBBS’ work and mission to the organization’s employees, clients, friends and associates, and recruited others to support BBBS as volunteers, mentors and donors. It’s a growth no one really saw coming.

“In the beginning, we knew we wanted to connect our associates with BBBS. We wanted to be more than a gala sponsor. We wanted our team to feel invested in the agency’s mission,” Blake said. “But seeing how things have grown, and how passionate and involved our employees have become, is really amazing,”

“We have employees who have taken leadership roles in fundraising and advocacy, joined committees, and who want to become Bigs themselves. We have associates who are out there championing BBBS’ work while also championing BB&T’s mission. I didn’t think it would grow like this,” Blake admitted. “The snowball effect has been incredible. Our partnership has affected our organization, our employees and our clients. In addition to our own team members, we now have clients coming in as Ice Ball sponsors, joining the Ice Ball host committee, and then leveraging their own networks to fundraise for BBBS. Seeing this evolution has really been rewarding.”

“I think our involvement with BBBS has brought our organization together city-wide,” said Cathy Haines, BB&T’s Retail and Small Business Leader, and a former Big Sister. “We have 15 branches in Austin. Fundraising for BBBS has fostered friendly competition among all our teams and teammates. We look forward to giving back to BBBS, and we gain as much as we give. BBBS is a wonderful organization that we have all got behind, and our partnership with BBBS makes us proud.”

BB&T’s support for BBBS extends far beyond the walls of the company. “I help manage the annual fundraising campaign from the branch level, and I would definitely say that we do take it home with us,” said Susan McNeight, BB&T’s Market Leader, Onion Creek Branch. “Many of our team members not only try to raise funds through their interactions at the bank, but they also go home and tell their friends and families what they’re doing. They go on social media and say ‘Hey, I’m fundraising for BBBS. Would you consider donating?’”

“One of our tellers was a former Little, and our relationship with BBBS really means something special to her. And again, she talks to everybody she knows and tries to raise funds,” Susan said.

BB&T’s employees are also committing to more personal involvement with BBBS as well. “Every year, I’ve gotten more involved,” said Susan, who is currently a member of the Ice Ball Host Committee. “Ultimately, I’d like to become a Big Sister.”

BB&T’s support for BBBS not only brings their employees together, it also brings the company closer to its clients. “I reached out to my personal network when I was fundraising last year and I got a response from a company that donated $3,000, which I was not expecting at all,” Susan continued.  “The owner said ‘I just wanted to donate. I hope this contribution helps you reach your goal. My daughter is a Big in San Antonio, and BBBS is an organization I’m really proud of and believe in.’ He and his wife have been mentors to young kids in the past, so our campaign really touched him, and I’d had no idea. I was just making a request and his response was a surprise. This year, when I reached out to them again, they bought a table at Ice Ball. They’re coming to the gala from San Antonio and bringing some of their clients with them.”

Through all of the fundraising and networking however, BB&T never loses sight of the fact that the real goal of their activity is to get kids off of BBBS’ waiting list and into positive mentoring relationships. “That’s really been a motivating, driving factor,” Blake said. “We know that there are still 600 kids out there who are waiting to be matched with mentors of their own, and that’s something that drives us to tell every client who comes through the door about our partnership with BBBS.”

“BBBS has just moved into a new building that will give them room to grow. The agency’s program metrics are at an all-time high, and the organization has won a number of awards for program quality and impact. Now BBBS needs to increase its financial resources in order to serve more kids. We want to help make that happen.”

“I handle weekly calls with the captains of each branch and we talk about how much we have raised and how many kids those funds will get off the waiting list,” Susan said. “That makes the impact of our efforts very real and very personal. We know our activities are affecting kids’ lives.”

“When you look at the impact that BBBS makes on an individual basis, the difference a one-to-one relationship can make in a child’s life, it is very powerful,” Cathy added. “As former Bigs, Blake and I have witnessed this first-hand. To me, communicating that message is really important. Helping children, helping community members, and making the world a better place is an important part of what we do at BB&T. Working with BBBS allows us to put our mission into action.”

“At BB&T we have a saying that ‘No one can do everything, but everyone can do something.’  Blake concluded, “But, as our relationship with BBBS shows, by working together, we can do even more.” 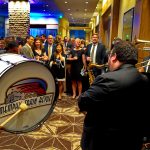