The Ice Ball 2017 Host Committee: Having A Ball

As the Texas summer heats up, there’s one cool thing you can count on – Big Brothers Big Sisters’ 2017 Ice Ball gala set for August 26 at the J.W. Marriott in downtown Austin. The Ice Ball Host Committee has been hard at work making plans and preparations for this major event – one of the largest fundraisers for the organization.

Christine and Blake Absher are chairing this year’s Ice Ball gala and have been involved with the organization off and on since 2008. “Our connection with BBBS began in Austin when I was a Big Brother for about 4 years,” said Blake, Austin market president of BB&T, the Diamond sponsor of this year’s event. “We moved to Houston for a few years, and then, when we returned to Austin, we knew we wanted to be involved with BBBS in some way. The Ice Ball Host Committee sounded interesting, and we’d never done anything like that before.”

Now, having been involved with Ice Ball for several years, Christine and Blake felt the moment was right to become even more involved in the event. “2017 is a great time to be event chairs,” Blake continued. “The agency has great momentum, the organization’s program metrics are at an all-time high, and we’ve been groomed for the last couple of years to further carry the Ice Ball baton.”

In accepting the leadership role, they’ve found themselves working with a great team. “The Ice Ball Host Committee is made up of an extraordinary group of people,” said Christine. “And they’ve become family. They are creative and selfless, giving out of the goodness of their hearts. They’ve been so inspiring and their enthusiasm is contagious. For many of them, this is their first connection with Big Brothers Big Sisters. They are raising money for a cause they’ve just come to care about, and they’re doing it so well.”

Team members heartily agree. “The members of the committee are focused, engaged and eager to contribute to the success of this year’s event,” said Connie Nelson. She and her husband Bill have been a Big Couple since 2011, worked as bid spotters for the Ice Ball that year, and subsequently served as Ice Ball Chairs in 2014 and 2015.

“Bill and I are honored to be serving on this year’s Ice Ball Host Committee,” Connie remarked. “The Ice Ball is SO important! It’s the largest BBBS fundraiser and monies raised help get kids off the waiting list and into the life-changing mentoring relationships they deserve. Guests attending the Ice Ball walk away with greater appreciation for everything BBBS does for Central Texas’ youth. Our 2017 chairs, Blake and Christine, are natural leaders with a passion for BBBS.”

Lauren Petrowski, news anchor for Fox 7, shares that passion for the agency and the event as well. “I look forward to the Host Committee meetings, seeing the other committee members, and knowing we’re making great things happen,” she said.

Lauren served as a Big Sister for 5 years and is still in contact with her Little Sister. “I was fortunate to have two loving, supportive parents growing up. Not every child has that, but that doesn’t mean they shouldn’t have the same opportunities to be happy and successful in life. Even with two parents, many kids can benefit from having additional positive influences in their lives. That’s what BBBS provides through mentorships, and I’m honored to help support an organization that does that.”

“As part of the Ice Ball Host Committee, it is also incredible to see the community and local businesses stepping up to help BBBS.”

Joanna Just of RSM, a Gold sponsor for the event, adds, “Ice Ball is a signature event that has grown over the years. To see where the event started and what it has become, is astonishing.  Ice Ball supports the wonderful things that BBBS does for children in our community.”

Not only is the team working to raise more dollars, new community connections are being made as well. “There are a lot of new people involved in this year’s event,” Christine continued. Blake agreed, adding, “We have a significant number of new donors. We are grateful for donors who’ve supported this event for years. It’s also a testament to the 2017 Host Committee members’ efforts that they have reached out to their own personal networks and friends to establish new relationships on behalf of the gala and BBBS.”

“I appreciate how the committee members have come together to support this event personally because of their dedication to Big Brothers Big Sisters’ work,” Joanna added.

This year’s Ice Ball not only has new sponsors, it also has a new location at the J.W. Marriott. “There’s an excitement and a freshness with the new venue and the move downtown,” Christine said. There are also new live auction packages and new programming.

And make no mistake, it is a fun night for all involved. “It is such a fabulous night. Without a doubt, you’re going to have a good time,” Lauren said. “But for me, I love to see the room full of hundreds of people all coming together because they care about kids in our community having the best opportunities, and the brightest futures, possible.”

“The Ice Ball is the coolest place to be in August,” Connie added. “Great food, entertainment, incredible silent and live auction packages, and so much more. Bill and I love seeing friends at the Ice Ball year after year, and meeting new people who will enjoy a wonderful evening and learn more about BBBS!”

How does the Ice Ball differ from other galas around town? “Every dollar raised impacts children and families here in our community,” said Christine. “The fundraising is so local.” “It’s all about supporting underprivileged youth, having a positive impact on children’s lives, and educating people about BBBS” Blake added.

After months of planning and preparation, the night itself is a culminating celebration. “The event is a crescendo of a lot of work,” Blake said. “At the gala itself you reminisce about what everyone has done to make the event happen. I enjoy visiting with all of these amazing people and sharing what we’ve done collectively. It’s like going and seeing 800 of your closest friends,” he laughed.

Don’t miss this cool, spectacular, life-changing event set for August 26, 2017 at the J.W. Marriott. You can learn more and get your tickets now at www.austiniceball.org. 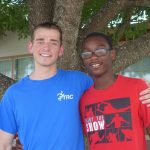