Recognizing the role of mentors in your own life is a step toward understanding BBBS’ mission and impact. Having benefited from mentoring himself, Joe Gomez is now seeking to “pay it forward” as a Big Brother to his Little Brother, Brian.

“My father, like Brian’s, was incarcerated during most of my youth,” said Joe. “We have both been raised by single moms. As busy as his mother is, it’s really difficult for her to spend time on academics and athletics.”

Joe considers himself a “personal trainer” who is helping his Little Brother work harder in school and on the field so that he can see the positive results of his efforts. “Our time together gives Brian the opportunity to challenge himself. We work on basic skills, motivation, and on refining what he’s focusing on.”

“When we were first matched, college wasn’t something Brian looked forward to or thought about,” Joe continued, “so I took him to visit the University of Texas campus where we walked around, met some of the staff, checked out the football field, and ate in one of the dormitories.”

“I wanted him to see how everyone on that campus is different – different races, different backgrounds. I wanted him to know that the people there are people just like us who are going to a university, graduating, and going on to the next stage of their lives. Our tour made college seem real and tangible, rather than like an unattainable pipe dream.”

College is the reason Joe became so focused on the importance of mentoring himself. Growing up without a father figure, Joe was influenced by an uncle who went to college, and who inspired Joe to follow in his footsteps. “Having a relative who went that far and who believed in me is the reason I am where I am today,” said Joe, who is now an account executive with The HT Group. “The circumstances I grew up in didn’t define my future as much as having someone in my life who told me that I could do, and be, more.”

Joe is passing this knowledge and encouragement on to his Little Brother. “I’m seeing a growth in his self-confidence,” Joe said. “I saw the biggest breakthrough when we were working out because it was the first time Brian could really see that he was getting better, that he was getting stronger, and that his efforts were making a difference. Once he saw some progress, the value of his efforts, and his ability to change things, became real. Plus, it created some momentum. I hope that no matter where he goes in life, if there’s ever a door that seems beyond his grasp, he’ll take a shot at opening it. That he won’t accept limiting beliefs or circumstances.”

“The kids who enroll in BBBS’ program are hungry for attention and hungry to grow. They will listen and they will try. They just need a little push.”

“Mentoring is a living, breathing process that never ends…. A constant giving back and paying forward,” Joe concluded. “So far, I’ve learned three main things – one, I’ve gotten just as much out of being a mentor as I’ve given; two, we really need support from other people in the community to do this; and three, it’s amazing how little it takes to change somebody’s life for the better.” 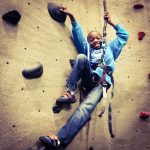