For about a month after they were matched, Big Sister Lauren thought her Little Sister didn’t like her very much. She was so quiet that Lauren thought maybe she wasn’t enjoying spending time together. Then, one day, Little Sister Elizabeth got a haircut. When Lauren picked her up for their outing, Elizabeth’s mom revealed that she’d modeled her haircut after Lauren’s hairstyle.

A smile spreads across Lauren’s face as she tells the story. It was then that she realized Elizabeth was just a bit shy, and that mentoring is made up of countless little moments, woven together over time.

Shortly after that, Lauren was pleasantly surprised by another sweet gesture. Elizabeth handed her a card, that read, “thank you for everything you do, I love spending time with you.”

Since then, Lauren and Elizabeth have grown even closer. They enjoy reading, eating frozen yogurt, and doing homework together. Recently, they went to Fall Fest and both dressed as Frida Kahlo (a Mexican painter who is best known for her self-portraits) in their homemade outfits.

Although Lauren admits the costume idea was based more on the available materials (crocheted items she found in her closet) more than anything else, she says she does want Elizabeth to be proud of her heritage.

“[It’s] important to me that Elizabeth knows that culture is beautiful and it’s something to be proud of. To have that dual identity is really something special and I want her to know that,” Lauren says.

That’s a lesson Lauren learned as a little girl herself. She recalls being teased about her appearance and having a hard time at school. Then, one of her teachers left an article on her desk about being Afro-Latina. Lauren kept that article and still has it in her memory box to this day. It seems the comfort and strength she took from a teacher’s thoughtfulness resonates even in adulthood. Now, she pays it forward.

“I want Elizabeth to feel cultural pride and to understand that being bilingual is a strength,” she says.

Since they’ve been matched, Elizabeth has started communicating more openly, shares her feelings and is even having an easier time with her homework. Lauren recalls sitting in a café, watching as Elizabeth breezed through her algebra homework.

“I was so proud of her. That made my whole week, I could cry,” Lauren said, as she began to tear up. “You go in expecting to do something for a kid and you get so much in return.”

Although Lauren and Elizabeth have only been matched for six months, it’s clear they’ll stick together. We look forward to many more simple, yet meaningful, shared moments in their future.

Lauren and Elizabeth are just one of nearly 1,000 matches in Central Texas.  There are still 600 local children waiting for a mentor. With your support as a donor or volunteer, you can help to end the wait. 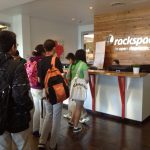 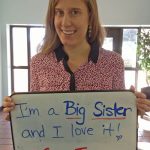