Most of us can remember mentors who’ve had a positive impact on our lives. Some of us meet our mentors in high school, college, or on the job. There are those however, who are fortunate enough to have grown up in the same house with their mentor – as Karl Spencer did with his dad.

A recent member of Big Brothers Big Sisters’ Foundation Board, Karl has always been a strong advocate for the power of mentoring relationships. He recalls several mentors who influenced his life when he was growing up, but says it was only in his later years that he realized the significant impact his father had made as well.

Growing up in a tough neighborhood on the west side of Chicago among those the outside world would call ‘gangbangers,’ Karl says his early mentors didn’t fit the typical profile. “There was a sense of community in that neighborhood. Those guys protected kids. They protected me and kept me in line,” said Karl. “It was a tough area with drugs, food deserts, gangs.”

“The men in my community helped me see baseball as my future and a way out of that neighborhood,” said Karl. “I loved baseball. My decision to go to a high school without a baseball program was tough, but I didn’t want to go to an opposing gang’s neighborhood.”

That decision made a huge difference in his life. The P.E. coach at his new school recognized his talent and helped him transfer to a different school with a baseball program. Karl’s new coach, in turn, taught him a powerful lesson in how to treat others. “Coach told us to cheer on the players, and I was on the bench yelling and cussing at the other team. Coach turned around and said, ‘I don’t know where you got that mouth, but we don’t do that around here.’ It was the first time I’d had a Black man, other than my father, tell me I needed to be a certain way,” said Karl. “From that point on, I started focusing on how I treated people.”

Another mentor who made a huge impact is 100 Black Men member and mentor Eric Collier.  Over the past 4 years, Eric has been pivotal in helping Karl understand his value to his family, 100 Brotherhood, and the community.  “Eric has been a father-figure to me because he’s helped me make critical decisions in the 100.  From the George Floyd protests, voter registration push in 2020, to how I communicate and deal with my self-healing, the organization, and the community.  He’s been my life coach and I’m eternally grateful for our friendship and brotherhood,” said Karl.

All of these mentors influenced Karl’s growth and development, but the major influence in his life was his dad. “People don’t understand the importance of a father to a young man,” said Karl, who works as a Senior Administrative Assistant at The University of Texas. “I would not be here talking to you today if my father had not helped me understand my value within the community, my value to my family, my value within myself.”

Karl calls his dad “The Quiet Assassin” because he was a man of action and few words. “My dad moved in silence, but he always helped people who were down and out. He just didn’t talk about it,” said Karl. “I saw all of that as a kid.”

“I grew up where the system was designed for me to go to prison. My dad sacrificed everything to move us out of that neighborhood, because Chicago was very segregated,” said Karl. “He moved us to a high rise right off the lake front. He was living paycheck to paycheck, but he said, ‘I refuse to let my kids suffer any longer.’”

“He’s my hero. There are no words to describe it.”

Years later Karl made a similar move. “I did the same thing my dad did when I packed up my family, took my last $2,000, and relocated to Austin to provide a better life for my children,” he said.

After arriving in Austin, Karl took his father’s example to the next level by joining the organization 100 Black Men of Austin, Inc., where he currently serves as president. “We are brothers who help each other get through life,” said Karl. “But we also try to help as many people as we can. We can’t save the world, but we try to help one kid at a time.”

That “one kid at a time” mentality is what has connected Karl to BBBS, first as part of the Foundation Board which oversees BBBS’ Scholarship Program, and then by engaging 100 Black Men of Austin in helping and supporting BBBS’ Littles. In late 2020, the group teamed up with Knot Standard and sponsored 2 of our male mentees in a Dress for Success program which included a private event at the clothing store where Knot Standard provided each mentee with a tailored suit and 100 Black Men of Austin provided them with shirts, shoes, socks, and ties.

“I get emotional about this. I want kids to see beyond their immediate circumstances. The words we live by at our organization are ‘What they see is what they will be’,” said Karl. “I want to teach young men to be the greatest leaders they can be, and perception is critical to that… you have to dress accordingly.”

Karl recently helped one of BBBS’ Little Brothers find and pay for a set of clothes to attend BBBS’ Ice Ball Gala where he was being honored. “I so appreciated that opportunity. This Little Brother had a different style in mind than wearing a suit,” said Karl. “And I wanted to give him the chance to be himself. It brought tears to his eyes when I said, ‘You tell me what you want to wear.’ I wanted him to know I was glad for who he was and how he wanted to present himself. It was an experience I was blessed to be a part of.”

“When I think of the kids I’ve helped and the people who’ve helped me along the way, it’s all just about doing God’s work, and dad’s work,” said Karl. “I’m living his legacy through my actions. It’s all about love thy neighbor, give help when needed. Be the person God ordained you to be.”

In being himself, Karl has chosen to share his experiences, life lessons, and talents with children to help them become all that they can be as well. “I have learned that one interaction can change a kid’s life,” he said. “When you meet a young person, you have the opportunity to share your story and that can help them out. You have to be vulnerable, but that can show them, ‘If he made it, I can make it.’ It gives kids hope.”

Given the uncertainty of the past few years, a little hope can make a world of difference.

We appreciate Karl’s kindness, generosity, and his important contributions to BBBS and to the young people in our community. His dad would be proud. 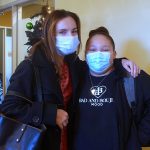 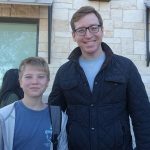