The Spirit of Giving

Many Bigs cite “wanting to give back” as their main reason for getting involved with Big Brothers Big Sisters of Central Texas. It’s not surprising then that they inspire this volunteer attitude in the Littles they mentor as well. On any given week you will find BBBS matches volunteering at animal shelters, working in community gardens, donating food to families in need, and doing many other service-oriented projects. So, after Hurricane Harvey hit the Texas coast, Bigs and Littles were ready to lend a helping hand.

Little Sister Tyranee and her Big Sister Janice have been matched for almost a decade. Spending time giving back to the community and to those in need is something that has become second nature to the pair. So, when they heard about ways the community could help hurricane victims, they got busy.

“Mayor Adler was on the news encouraging Austin to donate kits to the Hurricane Harvey evacuees,” Janice said. “My church was getting involved and I asked Tyranee if she wanted to help. Without hesitation she said, ‘Sure, I’d like to do whatever I can,’ and that just melted my heart.”

The two went shopping to get supplies for the hurricane relief kits as one of their regular outings. “I wanted her to have the opportunity to help someone else,” Janice explained. “We had a good time together gathering the items, but it also really helped Tyranee understand what was going on. She kept asking questions about what had happened. She said, ‘Where are the people?’, ‘They lost their homes? Oh, wow, I can’t imagine that.’”

“After we were finished she said, ‘It felt really good to help out.’ This project helped her realize that even when you don’t have a lot of resources, there are always things that you can do to help someone else.”

Tyranee, who is 18, also contributed some of her own money from her part-time job to the cause. A powerful demonstration of the impact the experience had on her – and an example of how someone who has overcome her own obstacles is helping others to overcome theirs. “Tyranee has been through a lot,” Janice continued. “She’s moved almost every year since we’ve been matched. She and her younger brother had opportunities to choose a different path in life that did not include completing high school and college. But they didn’t, and I’m so proud of them! They’ve been able to overcome difficulties of their own.”

Getting involved in the hurricane relief effort is just one example of how Janice has seen Tyranee grow since they’ve been matched. “I’ve seen Tyranee change tremendously, from being afraid of venturing out to try new things to now speaking up and getting involved,” Janice said. “My church, Wesley United Methodist, has offered her opportunities to speak in front of people through their different programs. That’s something Tyranee said she would never, ever do… but she has. The last time she spoke, I was sitting there video recording her and becoming very emotional at the same time. It’s just been amazing to see her growth.”

Tyranee is now a high school senior and she wants to go to college, as does her younger brother. She plays on her high school’s volleyball team and is very interested in cosmetology. She is currently taking courses on the subject.  “It’s all because of BBBS that we were put together,” Janice remarked. “What an awesome organization.”

For Tyranee and Janice, as for the victims of Hurricane Harvey, it’s all about turning tough situations into something positive. “Tyranee has been through a lot, but she is moving forward in a positive way, that’s what is so awesome about her,” Janice said. “She has a beautiful heart. I know she’s going to do well in life.” 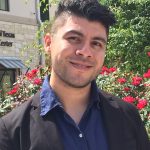