The room was filled with excitement, pride and joy at Big Brothers Big Sisters of Central Texas’ 32nd annual Promising Futures Scholarship Ceremony. More than 150 family members, friends and Big Brothers and Sisters gathered to honor Little Brothers and Sisters who were receiving college scholarships and scholarship promise medals as part of BBBS’ Scholarship Program.  Kristie Gonzales, President and General Manager of KVUE-TV, was the keynote speaker for the event, which took place June 16 at Austin Community College’s Eastview campus.

“Turn the challenges you face in life into opportunities for growth and success,” said Gonzales, who shared her own personal and professional experiences with attendees. “Let your mentors help you achieve your dreams, and never stop asking their advice on how to get where you want to be. It’s evident from all the people in this room that you have a community standing behind you. And remember, as you climb – lift others.”

Kristie shared her story of becoming a television executive and how mentors made a difference for her. “I’m standing where I am today because mentors helped me find my talent and my path early in life,” said Kristie. “And I still have mentors who are helping me as I move toward my next goals.”

Students received scholarships that will be applied to a variety of institutions and fields of study. This year’s graduates will be attending the University of Texas at Austin, Texas A&M University, Blinn Junior College and Franklin University in Switzerland, among others. Graduates plan to pursue studies in forensic science, computer engineering, biochemistry, nursing, social work, music, counseling and business.

“The promise of a scholarship means commitment to me,” said Chris, a scholarship promisee. “This medal reflects a commitment to my education. It’s like saying, ‘I’m going to complete my studies. That’s my plan.’ I’m thinking about becoming a robotic programmer or an engineer.”

With the help of his Big Brother Scott, Chris has attended several engineering and programming events in the area. “We wanted to see what is happening here in Austin and what you can do with skills in robotics and artificial intelligence,” said Scott. “We wanted to learn what is available.”

One event they went to involved learning about self-driving cars. The pair had the opportunity to program a car’s speed and determine its direction. “It was really cool because that’s in line with what I’m going to need to know in the future,” said Chris, who just completed his freshman year of high school. “To pursue the fields I’m interested in, I’ll need to know programming like the back of my hand.”  BBBS’ scholarship promise is a first step on Chris’s journey to realizing his dreams.

BBBS’ scholarship program offered similar support to other Littles as well. BBBS awarded and promised more than $700,000 in scholarship funds to 210 Littles this year.

“This is absolutely one of my favorite events of the year,” said Brent Fields, CEO of Big Brothers Big Sisters of Central Texas. “Pursuing a post-secondary education opens so many doors and opportunities for the kids we serve. Many of our high school graduates are first-generation college students. This ceremony brings our students together and allows us to celebrate their academic achievements and aspirations. When we put that medal around their neck or hand them their scholarship certificate, it is often a game-changer for these young people.”

Cheers and camera flashes greeted the graduating seniors and promisees as they crossed the stage to receive their awards from Thessaly Startzell of the BBBS Foundation Board. Lauren Petrowski of Fox 7 Austin was the emcee for the event, with speeches given by KVUE-TV President and General Manager Kristie Gonzales, Virginia Murillo Fraire, Vice President of Student Services for Austin Community College, and Big Brothers Big Sisters of Central Texas CEO Brent Fields.

Big Brothers Big Sisters of Central Texas’ Scholarship Program began in 1986 when the agency received a contribution from an anonymous Central Texas donor to establish a program designed to encourage Little Brothers and Sisters to complete high school and pursue post-secondary education. The program was the first of its kind throughout the nearly 350 BBBS chapters.

Since the program was founded, the agency has awarded more than $5 million in scholarship funds to 2,500 Little Brothers and Sisters in Central Texas.

“For these students and families to know that there is already an investment in their future is a big deal. What’s not to like about that?” said Brent. “BBBS’ Scholarship Program has a powerful impact on the lives of our Littles and their families.”

Following the ceremony, attendees were treated to hummus, chips, fruit, cheese, and chicken hors d’oeuvres provided by Primize Catering. Additional treats were provided by Chick-fil-A and Edible Arrangements. Families were also able to create memories in an onsite photo booth provided by MyEventIsTheBomb.

Special thanks to representatives from the College of Health Care Professions, Texas State University, The Financial Literacy Coalition of Central Texas, and the United States Army who provided graduates and promisees with additional information.  Thanks also to the volunteers who joined us from IBC Bank and the Young Men’s Service League. 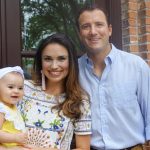