One of the most powerful ways of showcasing the impact Big Brothers Big Sisters makes is through stories of the relationships of our Bigs and Littles. Learning about how our matches grow and develop reveals how mentoring changes children’s lives for the better, forever. A key partner in telling these stories is Ted Barnhill, executive producer and founder of Castleview Productions – a local video production company.

For the past several years, Ted and his team have worked with BBBS to produce the “mission moment” match video shown at BBBS’ annual Ice Ball Gala. This story is often considered the highlight of the event. “Creating videos and telling stories is something I can do to support BBBS,” said Ted. “It feels great to serve the agency in a way that makes a difference and that plays to our strengths.”

The videos Castleview produces are extremely impactful, as they portray individual match relationships. “Showing the power of that bond between a Big and a Little is amazing,” said Ted. “To see the unique connection Bigs and Littles have is always impressive. It speaks to what I learned years ago as a Big Brother myself… that there’s an automatic, intrinsic force that makes these bonds work. The regularity of match outings, the one-to-one attention, and the pure ‘I’m here just for you’ emphasis make these relationships work, over and over again. Children just blossom because of it.”

The Big/Little bond is something Ted understands and that he has experienced first-hand. He began mentoring with the Austin Independent School District’s Mentoring Matters program while in college at the University of Texas at Austin. He then moved to Chattanooga, Tennessee, to pursue a career in TV reporting, which is where his connection with Big Brothers Big Sisters began. “I had a friend who was volunteering at BBBS and I had enjoyed being a mentor years earlier, so I signed up. Within a few months I was matched with Demetri,” said Ted. “Our first meeting was a story in itself.”

Ted and Demetri were both nervous at their first outing. Ted suggested that they go bowling, which sounded really strange to Demetri. They finally settled on going to Sonic and simply getting to know each other. “When we were finished and I brought him back to his home I said, ‘Well, this was fun!’, but Demetri wouldn’t get out of the car,” Ted laughed. “He was scared I wasn’t going to come back. I reassured him that I would be back and that we would do something the next week. He was very excited to have a Big Brother.”

But the story doesn’t stop there. “It took me 10 minutes to get back to my apartment,” Ted continued. “This was in the days of answering machines, and when I walked into my apartment I noticed that I had 3 messages. When I played them back, the first was from Demetri saying, ‘Hey Ted, this is Demetri and I thought we could go swimming next week.’ I listened to the second message, which was also from Demetri, with another idea for the next outing. The third message was from Demetri again, saying ‘Hey Ted, maybe we could do this…’ Three messages within 10 minutes.”

Their bond had begun to form, and Demetri was totally bought into the match. “He didn’t know me, but he saw the opportunity,” said Ted. “He was a very outgoing kid. He was an only child and his mother was a single mom. We were matched two years and became super close.”

Sadly, the match ended when Ted moved back to Texas, but he has kept in touch with Demetri throughout the years. “I was part of his family. The care his mom showed me was amazing. She was so thankful to have help. We were on the same team trying to help this child,” said Ted. “It opened my eyes to the need and crystallized the importance of mentoring. Being a Big Brother made my world bigger, and it gave me perspective that I didn’t have before.”

“From age 10, when we were matched, Eric was facing overwhelming odds in a family with separated parents who were struggling to keep things together for themselves, much less for their children. His anger and sadness about that led him to act out, and he got into trouble at school. When I tried to talk with his school counselor to see how I might help, I got this immediate sense of inevitability from the school about where Eric was headed. The counselor at the Alternative Learning Center literally told me, ‘There are 200 more kids just like Eric here.’ He agreed that Eric could benefit from counseling and he saw how sensitive Eric was, but guiding me to someone else who could help was just too much of a load for him to take on.”

“To make matters worse, his time at the ALC introduced Eric to a world that felt much more like a prison than a school. That experience, combined with his anger and anxiety, eventually led to him getting arrested. He stole a car radio from a neighbor so he could pay for Zanbars (he was self-medicating his anxiety). His grandmother made sure he got fed, and that he had a roof over his head, but not much else. I was the only one trying to get him into counseling or some other program, and it’s like the sense of inevitability had consumed Eric as well.”

“When he went before a court judge, I was the only one there to stand up for him. He even told me, ‘You know, you’re the only one in my life who would do that (come to speak up for him in court).’ I haven’t been able to get that out of my mind… that at age 15, on the day he was getting convicted, I was the only one from his family who showed up.”

Ted eventually lost touch with Eric. “Eric moved when he got out of jail. His phone was disconnected, and his Mom moved, and I haven’t been able to find him since. But I still think about him and about the perspective he gives me on BBBS.”

“Without Big Brothers Big Sisters, who else is willing to stand up for individual kids like Eric? I don’t accept the idea that his path was inevitable, and BBBS’ mission speaks to that same belief. I really believe mentoring can provide the support kids like Eric need, so they’re not alone in facing all the hardships of youth. Mentoring can help change their lives for the better.”

In addition to being a Big Brother, Ted served as a member of BBBS’ Executive Board for seven years. “There were a lot of great people working to keep the agency going at that time. There was a kind of ‘scrappiness’ to the group. We were excited when we raised $30,000 at an event,” laughed Ted. “Nowadays, I’m just in awe of what the agency is doing.”

“It’s very gratifying to see the number of people BBBS is engaged with at Ice Ball today, and to see that Austin finally ‘gets it’ and supports the agency and it’s work.” said Ted. “We’re growing something that people identify with, and that message is getting out. People are realizing it doesn’t take much to make a positive impact in a child’s life.”

“I know BBBS is making a difference,” said Ted. “I see it in my own experiences, and in the videos we produce. I really, really enjoy interviewing the matches. I’m always touched by some aspect of their story that I didn’t expect. The richness, the subtleties of those interviews is really fun for me.”

“I hope more people will volunteer to become Bigs. BBBS is a such an important organization,” said Ted. “There’s always good that comes out of devoting time to BBBS, and there are so many children and families in the community who can benefit from the additional support and friendship that BBBS provides. BBBS provides not only help, but hope.” 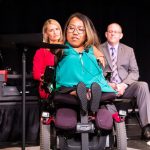 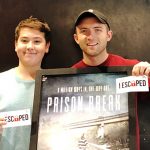