When Connie and Bill moved back to the States in 2009, after living and working overseas for 20+ years, they chose Austin as their home. Once settled, they began looking for ways to get involved and make an impact in the Austin community, in addition to their volunteer activities at Riverbend Church. Their oldest son, Bill, reminded them of his years serving as a Big Brother in Austin (while attending UT) to a young man in the BBBS program and what a rewarding and life-changing experience it had been. A light bulb went off – Bill and Connie contacted Big Brothers Big Sisters of Central Texas and within weeks had become a “Big Couple” to their Little Brother, Thomas. This summer they are celebrating four years together in the BBBS program.

Connie and Bill have been amazing champions for Thomas and have become increasingly involved with BBBS and the Ice Ball gala, the organization’s largest fundraiser. This year, Connie didn’t hesitate to say YES when asked to chair the 11th annual gala, pledging to make this year’s Ice Ball “bigger, bolder, and brighter.” Indeed, the event is on track to be the most successful Ice Ball yet. Bill joined her at the end of May.

When asked about how BBBS has impacted their family’s life, Connie doesn’t hesitate. “It’s huge,” she says. “And not just for Bill and I, it impacts our whole family, because our kids love hanging out with Thomas.”

Connie and Bill were wanting to make a difference and have found that difference with BBBS. “Volunteering with BBBS is easy because of the blessing that comes back to you,” she says.

What is hard is looking back over the many weekends they’ve spent with Thomas and trying to pick out only one favorite experience. “There are so many favorites, but I guess some of the best times are during the holidays,” said Connie. “Spending Christmas Eve with Thomas, decorating cookies, going to Christmas Eve service, just having a ball.” Then Connie remembered another special outing. “Taking Thomas Christmas shopping for his family with the money he’s saved from his allowance through the year,” said Connie. “He manages his own funds and he wraps all the presents he has chosen himself. That’s a huge highlight.”

The gifts don’t stop with the family. Connie and Bill helped Thomas set up a “giving back box” where he can save money and give back to his community – money the Nelsons match in kind. “We asked Thomas who he wanted to help with this money,” said Connie, “and he didn’t hesitate. He wanted to give to BBBS. So every year he presents a donation to Brent Fields, BBBS’ CEO. That’s his way of giving back.”

Bill and Connie bring a wealth of experience to the Ice Ball, having each founded and run successful businesses and chaired events and community efforts in the U.S. and overseas. When asked why they have continued to get more involved with BBBS and the Ice Ball, they say “what could be more important to the future of Austin, Texas or the world than its kids?” 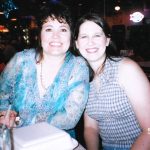