“A Match Made in Heaven”

When I was 11, my world as I knew it came to an end during a phone call during which my dad told me that he and my mom were divorcing.  I took the news very, very hard and struggled to adjust for some time thereafter.  My mother looked into Big Brothers Big Sisters and decided to enroll me to be matched in order for me to have another trusted adult I could lean on.

In the fall of 1987, I was matched with a vibrant, amazing high school teacher named Tammey.  One of our first meetings took place at a high school volleyball game, and I could tell right away how beloved she was by the students because they all came up to tell her hello. I learned right off what an exceptional person she was.

Tammey immediately took me under her wing and made me a part of her family.   We ran errands, we’d cook, eat dinner, and go to the movies.  They were all normal things, but they were done out of love.  She later became pregnant with her second son and delivered him on Christmas Eve.  Upon receiving the news, my mother drove me to the hospital where I was the first extended family member to hold her new bundle of joy.  It was an experience I will never forget, and one that further solidified our bond.

Though Tammey had lived nearby up to that point, she and her family moved to Plano where they lived for several years.  That could have put a huge damper on our relationship, but it did just the opposite.  I’d fly up occasionally and spend time with her.  I still recall how much fun we all had.

It wasn’t too long after that that a job transfer called Tammey’s family to Wichita, Kansas, where they still live.  We haven’t been able to see each other quite as often as we’d like, but our sisterhood remains steadfast to this very day.  She and her family made it down to Texas to see me get married.  She also came down to help and support me during my ex-husband’s rehabilitation after a near-fatal motorcycle accident.  She’s always welcomed me with open arms, and almost 30 years later, we are a match made in heaven.

I can’t thank BBBS enough for the positive difference it has made in my life. 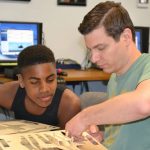 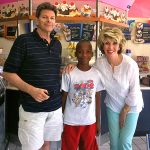