I’m not giving up on you

CJ is a Big Sister who has been matched with her Little Sister, Sam, for nearly 5 years at the time of this post. We invited CJ to share her thoughts on the challenges, rewards and lessons of being a Big Sister.

When Big Brothers Big Sisters asked me to guest write a blog about the challenges that my Little Sister Sammy and I have faced, I knew exactly what I wanted to write about. Sammy and I have been through every kind of argument, from minor tiffs about proper manners to knock-down, drag-out text fights about suspect boyfriends. However, there is one dragon we faced and slew that I think is universally challenging for any match: Pushing past the fantasy of being a Big in order to embrace the reality of what your match is and the possibilities of what your relationship could become.

As Bigs, I think we all go into our match with rose-colored glasses on – I know I did. Despite the reality check our Match Support Specialist tried to provide, I had visions of an instant connection followed by sister dates filled with giggles, nail polish, junk food, talks about cute boys and after school study sessions. What I got was a mistrustful young girl who “didn’t do hugs,” constantly blew me off and rarely showed any enthusiasm or gratitude for our relationship. I frequently felt defeated and hurt, and at times wanted to abandon my dream of us becoming soul sisters. But that’s not what Sammy needed. She didn’t need my bruised ego and hurt feelings. She needed my patience and understanding.

Having had numerous conversations with other Bigs, I’ve discovered we often project our own utopian intentions onto our Littles, only to find ourselves wrought with disappointment when those intentions aren’t mirrored. When all you want to do it help, it’s easy to forget that there is a reason children are looking for guidance. So many kids have been hurt and disappointed by the people who were supposed to protect and care for them. We forget that if we want their trust, respect and love – we’re going to have to earn it, sometimes the hard way. So that’s what I did.

For a year I swallowed my pride, and impulse to “wash my hands of this nonsense,” as Sammy tested me over and over. Make no mistake, I didn’t let her behavior slide, but every lecture about respect and communication was followed with, “I’ll see you next week.” Then one night it happened. I had just dropped her off and she was making her way up the driveway when she suddenly stopped, turned around and opened her arms up wide as if to say, “OK. I’m going to trust that you’re worthy of a hug. Don’t blow it.” “Really!?” I asked. She smiled, nodded and threw herself into the first of many hugs.

CJ and Sam at the Match Holiday Party 2013

Mostly, I remember the moment I realized that I had become a person who was willing to set aside her own pettiness, in order to do right by a child who desperately needed someone to say, “I’m not giving up on you.” I became a Big Sister hoping that I could make life better for a kid who needed a friend. I couldn’t have imagined that Sammy would make life so much better for a grown-up girl who needed a little sister. 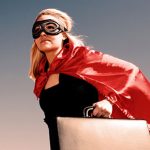 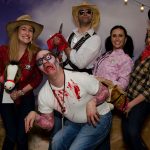