When you’re going to build something solid and lasting, you need a good foundation. Just ask the founders of Big Brothers Big Sisters of Central Texas, who for many years carried on the work of mentoring in local backyards, coffee shops, and out of a small office in a church.

To build the foundation for a mission that endures for more than 50 years, you need the help of people who have a heart for what you’re trying to accomplish and who will stay the course…. people like this year’s Ice VII Award winners, Connie and Bill Nelson.

We are proud to celebrate the important reach and influence they have had, both on BBBS, and on the Ice Ball’s 17 years of existence.

Connie and Bill were first connected to BBBS through their son, Bill, Jr. who became a Big Brother when he was in college at UT. His relationship with his Little Brother had a positive impact on the whole family, setting the stage for Connie and Bill to become a Big Couple in 2011.

“We’d just returned to the United States after working overseas for more than 20 years and were looking for a way to give back to the community,” said Connie. “Our son, Bill, said, ‘Why don’t you get connected to Big Brothers Big Sisters?’ And at that point, a light bulb went off.”

Within weeks they became a “Big Couple” to their Little Brother, Thomas. “We were kind of like Big Grandparents. People might think that, due to our age difference, we wouldn’t have had that much in common,” said Connie.  “Surprisingly, we did! We love to do things outdoors, go to movies, play mini golf, ride on go-karts and much more. Bill and our son, John, taught Thomas to play baseball and got him a bike for neighborhood rides.”

Of course, the learning was not just one direction. Thomas got Connie hooked on all the movies in the Marvel universe. “He knows all the characters and helps me keep them straight,” laughed Connie.

Thomas’s family and the Nelson’s became an extended family for one another.

They have special memories of celebrating Thomas’s birthday together, along with his twin sister Juanita. “There are so many favorites, but I guess some of the best times are during the holidays,” said Connie. “Spending Christmas Eve with Thomas, decorating cookies, going to Christmas Eve service, just having a ball.” Then Connie remembered another special outing. “Taking Thomas Christmas shopping for his family with the money he saved from his allowance through the year,” said Connie. “He managed his own funds and wrapped all the presents he had chosen himself. That was a huge highlight.”

But one tradition that touches Connie’s heart is the one where their example inspired Thomas to give back. “Every year Thomas would set aside a portion of his allowance for a charity of his choice. Every year he decided to give the money back to BBBS and would present Brent Fields with a check.”

“Getting to know Thomas and his family over the years has been a humbling, learning and inspiring experience for us as a family,” Connie said. “We have developed a deeper understanding of some of the challenges kids in our community face. It’s a blessing to be part of Thomas’s life,” said Connie. “Volunteering with BBBS is easy because of the blessing that comes back to you.”

The Nelsons knew they were in a special place from the beginning of their relationship with BBBS. “We immediately felt a connection to the agency and their one-to-one mentoring program for at-risk kids,” said Connie. “Thomas was one of those kids. Being matched with him 10 years ago opened our eyes to a critical need as well as an exciting opportunity.”

They saw the need to help BBBS provide more mentors for kids like Thomas, which led Connie and Bill to help in another critical area as well. Just 2 months after becoming a Big Couple, the pair attended their first Ice Ball gala.  “It was a much lower key event then, attended by a few hundred people with food and drink provided by local food carts,” said Connie. “Witnessing the generosity of people giving each year to help support the program and get kids off the waiting list inspired us to become more involved and to help the event grow.  We haven’t missed an Ice Ball since and have been blessed to be a part of its transition to the premier gala it is today.”

Not content just to attend the event, the pair signed up to become members of the Ice Ball Host Committee. With their leadership and participation, Big Brothers Big Sisters’ Ice Ball has become one of the community’s signature events. Connie and Bill have the unique distinction of having chaired the Ice Ball for two years in a row, in 2014 and 2015.  And they have recruited others to participate in, donate to, and chair the event, as well.  They have been long-time Ice Ball sponsors at the Gold Level, they have contributed items to our Live and Silent auctions, and they have been generous Fund-A-Friendship donors.

“Obviously, Ice Ball is important to BBBS from a financial point of view,” said Bill. “But of equal significance is its ability to bring nearly a thousand people together every year to help more kids realize their full potential. What starts as another year of financial support gets multiplied many times over in a Little’s growth and development for years to come.”

In addition to supporting the gala, Connie and Bill have been tireless advocates for BBBS in many areas.  They are members of BBBS’ Giving Society and were major donors to BBBS’ 2016 Capital Campaign which led to the creation of a brand new, and much needed, mentoring center facility. With hearts as big as Texas, they lead by example, with passion and with purpose.

In our 50th anniversary year, we are pleased to present Connie and Bill Nelson with the 2021 Ice VII award.

“It’s an honor to be recognized for our contributions to BBBS,” said Bill.  “What began for us 10 yrs. ago as an opportunity to give back has become much more as we’ve been able to personally experience BBBS’s positive influence on Austin kids every year.  We also have a continuing relationship with Thomas and his family that would never have been possible without BBBS.”

“I was shocked when Brent shared the news of the award with me.  I love BBBS and being part of its mission, which is very near and dear to my heart,” said Connie. “As they say, ‘it takes a village,’ which is so true with BBBS.  There are many people working together to make better lives for children who need extra attention. And the one-to-one mentoring is a great way to develop a lasting relationship with a child.”

“Looking back, our time as a Big Couple has truly been one the best experiences of my life,” Connie added, “and receiving the Ice VII Award is a highlight I will always treasure.”

However, they didn’t get involved for the accolades. In the beginning, Connie and Bill simply wanted to make a difference. And, as Connie says, “What could be more important to the future of Austin, or our country, than its kids?” 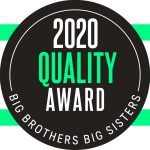 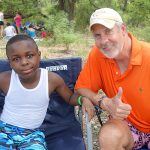