What in the world could kids catching and throwing a football have in common with an elegant, formal gala? Two things. First, they both make a huge impact on helping kids reach their potential; and second, they are both connected to two of Big Brothers Big Sisters’ long-time champions, Rachel, and Colt McCoy.

The McCoys have been supporters of BBBS’ Ice Ball Gala for many years. From offering special live auction packages featuring a flag football game and BBQ with Colt, to hunting packages, to a New York/NFL experience, as well as serving on the Ice Ball Host Committee, Rachel and Colt have contributed to the Ice Ball’s success.

In addition, every summer the couple supports BBBS in another way that many may not be aware of, through Colt’s Youth Football ProCamp. Each year BBBS matches are invited to participate in this special program. Kids get hands-on, professional instruction learning fundamental football skills in a high energy, positive environment.

To understand the camp’s impact, you need look no further than Little Brother Dajuan, who has attended the camp four times, starting when he was six years old. In his first year he was named the #1 Draft Pick for the camp, which solidified his goal of wanting to play professional football. “He really enjoys the camp,” said his Big Brother Joel, “because he’s very competitive.”

“They give the kids a report card at the end of camp,” Joel continued. “Two years ago, his report card stated that Dajuan excelled at the football portion of the program, and that he was the fastest kid in his age group. He has great skills. He’s always caught every pass thrown to him. But one other area on the card was conduct, and Dajuan was told that he did too much trash talking.”

Joel brought it up to Colt at this year’s camp. “He laughed and told Dajuan that if he was going to trash talk, he had to back it up with his on-field performance,” laughed Joel. “But it allowed me to talk to Dajuan about his conduct. I explained that a good attitude is a big factor in being a well-rounded football player.”

“The camp also helps kids focus on teamwork,” said Joel. “Dajuan has a lot of confidence in his abilities, but I think the camp has helped him understand more about working together as a team, rather than as an individual.”

After a year spent dealing with COVID concerns and restrictions, just having the opportunity to be at the camp this year was important to Dajuan. “Dajuan is a very smart kid, and he has always made good grades,” said Joel. “But COVID was very hard on him. The home schooling was tough. Plus, COVID put a stop to all the team sports, which was a shock to him. I think sports, and this camp, are very good outlets for Dajuan.”

The camp is also helping Dajuan consider his priorities as he heads into his teenage years. “Camp has helped him refocus,” said Joel. “He told me his priorities are his grades and football.”

“Dajuan is a smart, intuitive, competitive kid,” said Joel. “My goal is to help him get a scholarship and get into a good college – you know 18 years old is not too far away. I always remind him that if he keeps his sports and grades up, the world is his oyster.”

“You have to show kids there’s a way,” he said. “The world’s not fair, but with a positive attitude you can find a way. Colt is a really good guy, and his example, and this camp, provide a positive path for kids.” 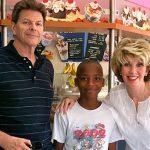 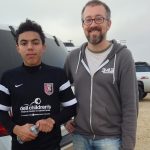