In many ways they are opposites. One grew up in the city, one grew up in the country. One is an extrovert, one is a shy, introvert. One excels at sports, the other claims to be a klutz. But when it comes to helping kids in the community, 2021 Ice Ball Chairs Paula and Kevin Burns, are totally on the same page.

Owners, CEO and CFO of Urbanspace Real Estate + Interiors, the pair are bringing the same energy and drive they have for their business to making this year’s event the best, ever. Because the goal is simple. “Oh, we want to raise more money for BBBS than anyone ever has,” said Kevin, who added with a smile, “The thought of beating my friends doing something that benefits all, is a really good feeling.”

Challenge extended. “My two cents… most of the people in our circle of friends and extended friends have done well, even during the pandemic,” said Kevin. “We need to remember the best way to give to the community is to help the youth of our community. Because it changes their trajectory. We have the ability to change their life’s trajectory right now, which helps them, as well as our community, for the long-term.”

It’s a life-impact with which both Paula and Kevin can identify. Though they grew up in very different environments, both point to mentors as making a big impact in their lives.

Kevin grew up in the historic district of downtown Charleston, West Virginia, a community with many similarities to Austin at the time. “I walked everywhere,” he said. “It was a great way to grow up. I’m a people person and walking the city you really get to interface with people.”

It was his ability to walk his community that put Kevin in contact with many of his mentors, and that inspired his entrepreneurial spirit. Kevin has been an independent businessman for a long time… a really long time. Like since he was 6.

“I was the oldest of four and my mom was always busy with my siblings, so I kind of raised myself,” said Kevin. “There was a lady who lived two doors down from my house and I’d hang out on the porch with her and her grandmother. Every Saturday I’d go to her house at 7:00 a.m. and she’d fix me breakfast. Then she’d help me with whatever my entrepreneurial project was for the day.”

“She got all her friends to save their aluminum cans and then we’d drive to their houses in her shiny, new BMW and fill it up with cans and take it to recycling,” said Kevin. “I’d make a few bucks.”

His industriousness didn’t stop there. Growing up living on one of the longest blocks in America – 98 houses – Kevin kept an eye out for the items put by the curb after estate sales, a benefit of living in the historic district. “I’d head out with my little wagon and go on a treasure hunt,” said Kevin. “Then I’d have my own porch sale. From there I moved on to mowing lawns and even became a Fuller Brush man when I was 10 years old. I was the youngest and the number one Fuller Brush man in West Virginia.”

Kevin’s background gave him the foundation to put his passion for urban living into practice. After he graduated from the University of Texas at Austin, he built a reputation as the ‘downtown real estate guy’ and founded the Urbanspace Real Estate company.

A lifelong Texan, Paula grew up in McAllen. A gifted athlete, Paula received a scholarship to Texas A&M University where she competed as a Division 1 high jumper on the track and field team and graduated with a degree in accounting.

“After college, I moved to Austin, and worked at a public accounting firm as an auditor for local, regional and Big Four firms,” said Paula. “I met Kevin during that time, and we hung out a bit. But then I moved to Houston and didn’t see him again for 10 years.”

When she returned to Austin, she was looking for a place to live and chose to focus on the downtown area.  “I’d heard that’s where you should live if you were single because you walked everywhere and you could meet a lot of people that way,” said Paula. “When I Googled downtown living, Urbanspace popped up and I remembered Kevin and reached out to him. He helped me find my first place to live, and six months later I was living with him.”

In keeping with their urban interests, Paula and Kevin live, work, and play in downtown Austin along with their two daughters Sawyer, and Sloane, and their two Doodle dogs, Finn, and Eloise. It was a business associate who got the pair connected with Ice Ball and its mission.

“Blake Absher was my banker and he and his wife persuaded us to be a sponsor the year they were Ice Ball Chairs,” said Kevin. “Also, my COO in business is my sister Lara.  She was on the Ice Ball Host Committee and was a Big Sister. I saw her interactions with her Little and thought about how important that was.”

The mentor connection was a personal one as well. “My high school high jumping coach was a great mentor,” said Paula. “She worked so hard with me to help me perfect my craft. She sent hundreds of letters out on my behalf to get me “known” at the college level. It resulted in a college scholarship which, coming from a family of 5 kids, really helped.”

“Looking back, I definitely had some ‘Big Brothers’ and ‘Big Sisters’ throughout my life, and they had a huge impact on me,” said Kevin. “In the inner city school I attended there were a lot of kids who could have really used a little extra help. So, it’s nice to be able to give back now that we’re in a spot where we have the ways and means to do that.”

And this year’s Ice Ball? Paula and Kevin see it as one of the most important years to support BBBS’ mission. “This year is so important because of the pandemic year we’ve just had which has emphasized the gaps that exist between those who have resources and those who do not. A lot of the kids in our community didn’t have the gigabyte connections to Zoom in to their classrooms, they didn’t have a quiet, comfortable place to do their schoolwork, and they haven’t seen their friends,” said Kevin. “And for many, their mom or dad are without a job or are essential workers. They need our support.”

The two also believe the past year’s challenges will bring additional energy, urgency, and excitement to this year’s Ice Ball gala. “The timing couldn’t be better,” said Kevin. “Having our friends together under one roof, I think the room is going to have so much energy in it because people are ready to spend time with their friends again, and to come together around something they care about. Something that makes a life-changing difference.”

“It’s full steam ahead,” said Kevin. “Supporting Big Brothers Big Sisters’ Ice Ball is one of the most powerful things we can do for our community.” 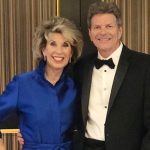 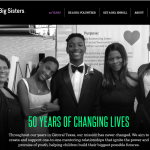