She loves kids and believes in community. This year Christina Eisenlord celebrates 10 years of pursuing both of these passions as an enrollment specialist at Big Brothers Big Sisters of Central Texas.

“My job is to interview and assess those coming into our program, from volunteers to family members to kids,” Christina said, “in order to make sure the program is a good fit for them. Then, with all of the information gathered during the interview and intake process, I work to make the best matches possible between new Bigs and Littles.”

It’s a responsibility Christina loves. “There are two things that keep me here,” she continued. “First, I love kids. I think they are amazing. I feel blessed to be able to be a part of their lives. They inspire me.”

“Second, I’m a big believer in community, and a strong community is built with strong kids,” she added. “Mentoring is a key component to building strong kids. I think BBBS helps kids become stronger members of the community.”

Christina takes the individual personalities and preferences of those she meets into account when forming a match. “The stronger the foundation a match has, the better the relationship will be,” she said.

Creating successful matches is not just Christina’s goal, it is one of her favorite things about her job. “I often hear stories of Littles whose behavior changed significantly after becoming part of our program,” she said. “For instance, several years ago a young man who entered our program was being disrespectful to those around him. He was having trouble managing his anger and was not doing well in school. I found a fantastic Big Brother for him and he is now treating his mom well, doing better in school, and being a better brother to his siblings. Stories like that motivate me. I know that mentoring works. Getting kids into positive mentoring relationships can make a world of difference for everyone involved.”

Even with its inspirational elements, the job has its challenges. One of the hardest for Christina is that of interviewing boys who want to have mentors, but not having enough men signed up as Big Brothers to match them with. The agency is continuously recruiting volunteers and raising funds to get as many children matched with Big Brothers and Sisters as possible.

The other challenge Christina experiences is that of being very involved with families and volunteers when they enroll with BBBS, but having less involvement with them once they are matched. “I only get to touch a part of their lives,” Christina said. “I get to interview these amazing kids, and then, when they’re matched with a Big and assigned their own match support specialist, I don’t see them as often.”

She works to make up for this by helping with monthly events held in BBBS’ new Youth Activity Center. “That’s when I get to see the kids and watch them interact with their Bigs,” Christina explained. “That’s always really fun.”

Christina is also part of BBBS’ Big Futures committee which is developing strategies to support Littles as they make the transition from high school to college and career.

She knows a thing or two about transitions herself since her father was in the military. “We lived in California, Texas, Japan and Michigan,” Christina said. She ended up attending college in Michigan where she received two degrees – one in social work and one in small business entrepreneurship. She tried working in the business world until she realized that her true calling was in social work and in helping kids, which is when she joined BBBS of Central Texas.

What does she do when she’s not working? “I’m a music freak,” Christina laughed. “It’s easy to catch me listening to music in my car, at my house, at my desk. I love rap and hip hop. And one of my favorite things is going dancing.” She also enjoys working on functional and creative projects around her house. As she says herself, she doesn’t get bored easily. 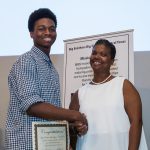 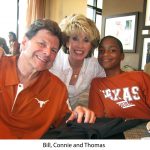 All In The FamilyBig Brothers Big Sisters profiles, Big Stories