Christina Snell fell in love with human behavior in college. In her words, she “just like[s] people”, especially kids. That passion resulted in her not only changing her college major, but in literally walking out of a college classroom and into a Big Brothers Big Sisters office. Ten years later she is still sharing her love for people and kids, but she is now in BBBS of Central Texas’ office, where she works as a match support supervisor.

Starting out as a pharmacy major at UT Arlington but soon switching to child psychology, Christina found herself working at a women’s and children’s shelter one summer. “It was too tough. There were many things there that I couldn’t shake off,” Christina said. “I realized I wanted to be on the light end of the tunnel. I wanted to be on the positive side of things where I could see healing happen.”

As a senior, she’d just left one of her UTA classes when she saw a girl wearing a BBBS t-shirt and asked her about the program. Following that encounter, she walked to the local BBBS office a few blocks away, asked if they had any openings – they had 3 – and a week later interviewed for all three positions and was hired. “I started there and never looked back,” she said. “I fell in love with it.”

Today, Christina oversees a staff of 5 match support specialists. She supports her team with any match-related issues: giving guidance, making sure compliance measures for national standards are met and that special events are staffed. In addition, she has elected to keep supporting many of the matches she started when she first joined the Austin office as a match support specialist. “I have had a long-standing relationship with these Littles’ families and these Bigs,” Christina explained. “Continuing to support these matches helped me maintain a balance when I made the transition from being a match support specialist to becoming a supervisor.”

Understanding both sides of the job is a real plus according to Christina because she knows what her team is going through every day, all the different “hats” they have to wear in their jobs, and the load that they are carrying. Much of her team’s success depends on the responsiveness of the families they are working with – families that are often dealing with significant difficulties.

These challenges fit well, however, with another of Christina’s passions. “I love empowering people,” she admitted. “Whether it’s encouraging a Big when a match gets difficult, or reminding parents that we’re here to help, or empowering staff to help a match through difficult times.”

One of the toughest challenges in her position is having to explain the unexplainable. “It’s hard when I have to explain to a child that I don’t know why their Big left,” Christina continued. “I have to explain it in a safe way. I have to let them know that sometimes life happens to people and that it happened to their Big, but that we’re going to find another Big for them.”

To help balance the challenges, Christina enjoys spending time with her husband and four kids – three girls and a boy.  She also loves singing karaoke, hiking, and creating special wall hangings. “I make things out of reclaimed fence wood. Neighbors will call my husband and say, ‘Your wife is in the driveway with a circular saw, what is she doing?’” Christina laughs. “But I love building things with old wood just for fun.”

Just don’t ask her to cook. “It’s still a New Year’s resolution that has never grown legs,” Christina said. “So luckily, my husband grills a lot.”

Since she’s been with BBBS for 10 years, people often ask her what her plans are. “I don’t have any plans to leave,” Christina said. “BBBS is like a family to me and the mission of the work we do is still alive for me. It’s been great.” 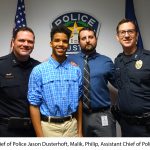 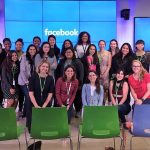