What it Means to be a Mentor

For many people, the words “mentor” and “mentoring” can be confusing. Some think that mentoring is related to education, or to being a tutor. Some people believe that being a mentor is work-related and has to do with employee training. Some equate mentoring with providing temporary child care or ‘babysitting’ services, while others see mentoring as the opportunity to become a child’s savior or hero.

In reality, “mentoring” is about forming a caring relationship with another person, supporting them, and sharing time and experiences with them. This process, while simple, is often profoundly meaningful and transformative for both parties, particularly as their relationship grows and deepens over time.

In the essay below, Albert Swantner, Central Texas’ 2016 Big Brother of the Year, shares his own story of being a mentor and what that experience has been like for him.

I remember what I thought being a Big Brother was going to be like when I joined 3 years ago. I remember attending my training and the (BBBS) Ice Ball and seeing the videos of Bigs and Littles and it seemed so simple; a kid needed his life to be changed in a big way and I was going to be there to do it.

When I first met Josh 2 years ago at the start of our match, I was ready to change his life immediately. However, our first meeting was mainly silence, some small talk, not exactly life-changing. So I started to think, well surely on the second meeting the life-changing part would come into play, but this meeting was also mainly silence. Josh is naturally very quiet, which is something that I completely understand, as I, too, am very quiet, so it was hard for me to find things for us to talk about.

I started to think that we would spend most of our days hanging out in silence. We went on like this for a few weeks, but slowly I started to get Josh to talk. He started to tell me about his love of soccer and video games, and before I knew it, I learned basically everything about his family, school, friends, hobbies, and he felt like part of my family.

We had a great time together, talking, playing laser tag, eating, bowling, playing pool, and just hanging out. But through it all, I felt like he was a good kid and that he didn’t really seem to need any changing. We had fun together and developed a great relationship, but I sort of gave up on this whole “changing a kid’s life” thing. It gave me some consolation that we had become great friends, but I figured that we would never be like those matches you read about and see during the banquets.

Then one day Sophia, my match support specialist, and I were talking about the activities Josh and I had done together. I told her about our tour of the engineering building at UT and how I was hoping Josh had had a good time checking it out. Towards the end of our conversation she told me that Josh’s mom had said that Josh has become more confident and is really considering going to college. His mother said that she believes some of this is a result of my time with him as a Big Brother. I was blown away.

After my talk with Sophia ended, I started to think back over the time I’ve spent with Josh and it hit me; I had been changing Josh’s life since our first meeting, by simply spending time together and sharing my experiences with him. The times we spent bowling and eating dinner had been so much more than just outings a few hours a month.

Once you realize that even the smallest actions have repercussions far beyond the actual experiences themselves, it changes your outlook on life. Doing something small or seemingly insignificant for someone can mean so much more than you imagined. And Josh has influenced my life as well. I will forever be changed by my experiences as a Big.

When evaluating my relationship with Josh, I realized that in reality I’m the lucky one. Josh has already given back to me more than I could possibly have given him. He has changed my whole perspective on “doing good.” The smallest actions make a huge difference to a child and BBBS has given me the amazing opportunity to do this for Josh, and for that I’m forever changed and grateful. 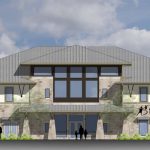 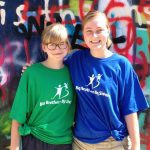