He only bowls once a year, but when he does, Mike McShaffry makes it count. He bowls at Big Brothers Big Sisters’ Bowl for Kids event, and he challenges others to “keep gaming” for a great cause.

Mike has been a part of BBBS’ Bowl for Kids for many years.  A senior software engineer with mobile gaming company ArtCraft Entertainment, he was recruited to the event 7 or 8 years ago by another local gamer who challenged all gaming company employees in Austin to participate.

“When my friend moved on to other things I kind of picked up the baton,” Mike said. “Now I send emails out to game companies and try to recruit teams.” One of his recruits was Stefan Sinclair who not only ended up bowling at the event, he eventually became a Big Brother and was named Texas’ Big Brother of the Year in 2015.

Why has Mike been so focused on helping with Bowl for Kids? Like any good gamer, he knows the program on several different levels.

Mike first became involved with BBBS as a Little Brother. “I was a Little in 1979 in Ft. Worth when BBBS was just getting started in the state of Texas,” Mike recalled. “My mom was recently divorced and she reached out through our church and found Big Brothers Big Sisters. My brother, sister and I were all paired with a Big Brother who was a senior at Texas Christian University.”

Although they were only matched for a year, the connection had lasting impacts for Mike. “Al was our Big Brother and all three of us had a great experience in the program,” Mike added. “Al took us on outings, just like matches do today. We went to get pizza and we went swimming. I attribute my interest in computers, in bicycles and in community service to him. He took us to the computer center at TCU and a lot of our outings were bike-related. He introduced me to all these things.”

Mike’s interest in giving back has not only turned into fundraising for Bowl for Kids, but also into being a Big himself.  “My wife Robin and I were paired with an older child,” Mike said. “Being his Big for a year was very rewarding and very heart-wrenching at the same time. Bigs sometimes want to solve all of the problems in a Little’s life, and that’s hard because some of these kids face challenges that are very complex.”

Mike and his wife worked to provide their Little with positive experiences and encouragement, introducing him to a variety of job possibilities such as riding with a firefighter at Austin Bergstrom International Airport, and rewarding him with special outings as an incentive to stay in school.

“The experience taught us how important it is for kids to see something other than what they think is a fated future for themselves,” Mike continued. “Many of these kids think ‘This is my only reality and I can’t get out of it or change it,’ but a Big can open new doors for a child and help them see that there is something more for them if they apply themselves and try to overcome the problems or obstacles they face.”

The Big and Little relationship is one Mike sees as having “forever” impacts. “I think if you help one kid, then that kid becomes an adult who can pass that on to so many other people. That is what’s so important about Big Brothers Big Sisters,” Mike added. “With BBBS you don’t just help one kid, you help every single person that child interacts with for the rest of their life. And that’s a big impact.”

That’s why Mike continues to be a major supporter of BBBS’ Bowl for Kids. “I love it,” he said. “It is such a fun event. I love seeing colleagues at the lanes in costumes, having a great time and, on top of that, raising money for BBBS to help children stay in or get into the program every year.”

Of course, being a gamer, there is competition involved. “I love the competition aspect, because game companies always like to one-up each other. Typically, we’ll all be watching our phones during the event looking at everyone’s fundraising,” Mike laughed. “And we’ll see ‘Oh, Certain Affinity (another game company) just broke $3,000. Everyone put in another $50.’ That definitely happens.”

In Mike’s experience, it all combines for a very positive result. “Having groups of people compete to fundraise for such a great cause is such an easy way to do something really good,” he said.

Plus, for this leader of team “Strikeadelic”, BBBS’ Bowl for Kids event fits his general philosophy of life. “No matter how you choose to use your time,” he said, “try allocating a little bit for making the world a better place than you found it.” 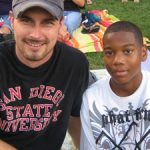