It’s one thing to talk about the benefits of mentoring, or simply to know the statistics about its impact. It’s a very different thing to witness a caring adult taking the time to make a positive impact on a child in need and revealing a world the child never knew existed. Such an experience can affect your heart in profound ways, even 20 years later. This is the case for Clayton Christopher.

Clayton, and his wife Carly, both have hearts for helping in the community and giving back – particularly where children are concerned. Their passion was inspired by growing up in families that believed in the importance of doing for others. “Growing up, we always served meals to those in need at Thanksgiving,” said Clayton. “And helped with non-profits. My parents were very giving.”

“We also volunteered a lot growing up,” said Carly. “In college I was involved in GENAustin, The Girls Empowerment Network. I saw that things were very different for the kids in that program than the way I grew up. I got to take ballet lessons, go to college. It’s heartbreaking to see kids who don’t have the same opportunities.”

Clayton grew up in Beaumont, but laughingly says he got to Austin as quickly as he could, initially attending St. Edward’s University. Carly arrived in Central Texas from Mason, Texas and attended Southwestern University.

“I spent time riding my bike across the country for about a year and a half,” said Clayton. “Then I was a charter boat captain. I wasn’t really sure what I wanted to do.”

He found his sense of direction when he started an organic tea business – Sweet Leaf Tea. “I put my life’s savings into that business,” he said. “From those humble beginnings and 100-hour work weeks, I was a 14-year overnight success.”

Clayton eventually sold that business, but found that he “couldn’t sit still,” so he started Deep Eddy Vodka, which he managed for 5 years before selling that company as well.

Clayton became involved with Big Brothers Big Sisters of Central Texas through a mutual friend. “He told me about the organization,” Clayton said, “but I always thought, ‘I’m a CEO. I’m too busy to be a Big Brother.’”

A chance encounter on a subway in New York City changed his mind, however. Clayton saw a woman, who appeared to be a business professional, interact with two young homeless girls. The woman’s actions were so kind and seemed to impact the girls so much, it hit home for Clayton. “It was God’s way of hitting me with a lightning bolt,” he said.

He signed up to be a Big Brother as soon as he returned to Texas. Clayton was matched with his Little Brother Andrew, who is now 24, and the two are still in touch.

But being matched was just the beginning for the Christophers. Clayton soon joined BBBS’ Board of Directors and then became part of BBBS’ Advisory Council. He also brought Carly into BBBS’ activities as they both became involved in the Ice Ball Gala. “One of the things we connected on early in our relationship,” said Clayton, “is that we are both very passionate about helping at-risk youth.”

Carly and Clayton know that BBBS’ model of one-to-one mentoring makes a profound difference for kids. It’s the reason they have been involved with the organization for the past 15 years. “The best programs develop strong relationships,” said Clayton. “And that’s what BBBS is all about. It is that consistent personal involvement between BBBS’ Bigs, Littles and staff that creates lasting, positive change.”

They both recall the powerful mentors and the impacts these people have had in their own lives.  “I think of family members,” said Clayton. “My father for his work ethic, my grandmother for her unconditional love, and my mother as a single mom. She sold her prized watch so my brother and I could go to camp. I didn’t appreciate it all at the time, but it has really stuck with me.”

“Two people come to mind for me,” said Carly. “A woman who took me and my sister through our confirmation in the church, and then, later, my high school theater teacher. It was so powerful to have people in my life who were interested in what I thought, felt and enjoyed; people who really supported my passions.”

The Christophers, who are parents of a six-year-old and a three-year-old, see the Ice Ball Gala as a means to help kids achieve their dreams and their true potential. “The easiest way for these kids to achieve success is to have a relationship with someone who believes in them and who has achieved a level of success of their own,” said Clayton. “BBBS facilitates this kind of connection and it’s why the organization is so critical to our community. And it’s why Ice Ball is so important.”

With their help, the gala has grown and evolved over the years. “We didn’t even have a gala when I was a Big Brother,” Clayton said. “Ice Ball has certainly grown. But COVID poses a risk to the event’s momentum. The gala is a material part of BBBS’ budget. If this event is not successful, we could lose staff, and then kids don’t get matched. The event is just highly critical this year.”

“It’s a pressing need,” said Carly. “Children are out of school and they might not have the support at home that they need. With COVID, youth are suffering in a way that is not okay. The pandemic has magnified their challenges and they need our help now more than ever.”

Their hearts for service, their history with BBBS and with Ice Ball, their generosity, and their compassion for kids are just some of many reasons BBBS will be presenting Carly and Clayton Christopher with the newly created Ice VII Award during this year’s online gala.

“Receiving this award is very humbling, exciting and inspiring,” said Clayton. “I don’t feel we deserve it.”

“It is such an honor,” added Carly. “But it is also a call to action to do more.”

And they are challenging others to do more at this year’s Ice Ball than ever before. “I would encourage people to personalize this event,” said Carly. “Before you log on to enjoy the virtual experience, take a moment to reflect on your own mentors, people who have helped you and who changed your life. Wouldn’t you want to give that experience to someone else who wouldn’t have access to it otherwise?” 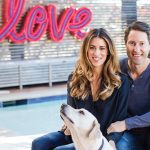 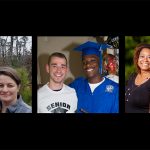