More the Same Than Different

They may be different ages, different backgrounds, different income levels, but Big Brothers Big Sisters’ Bigs and Littles are connected by the things they find they have in common – they focus on these and that makes all the difference.

Jeff had raised 3 boys when he started looking into ways to give back.  He felt he could use his experience as a dad to help someone else, and that’s when he found BBBS. “A friend suggested the BBBS program,” said Jeff.  “And after investigating the organization, it seemed like a great way to potentially have a direct impact on someone’s life.”

Since they were first matched in 2019, Jeff and his Little Brother Chad have had numerous adventures. “We like to play basketball, disc golf, arcade games, go to the gym, hang out in the swimming pool, watch movies, play laser tag,” said Jeff. “We are hoping to be able to attend a college basketball or football game once COVID is behind us.”

They always start their outings with food, though. “We always have something to eat on our outings. It’s really fun when Chad is introduced to a place he has never eaten before, and then once we’re finished he says that he really enjoyed it and is ready to go back,” said Jeff.

It’s a way the two are creating a bond and finding common ground. “Our relationship has reinforced my thought that people are more the same than different,” said Jeff.  “All parents basically want the same thing – steady work, home for their kids, opportunity for education, and for their kids to feel safe.”

“Kids are also the same. They need to know people care about them, need to be pushed to do well in school, need to be shown options other than video games,” said Jeff.  “I really hope to have gained a long-term “brother” well after the traditional match period has ended.”

Their bond has created an openness between the two, and with Chad’s mom. “I’ve been surprised at how open my conversations are with Chad’s mom,” said Jeff.  “We talk about all kinds of things, and it really helps me that she has been willing to discuss the challenges she faces raising her boys. Chad has also been open about his feelings regarding school, friends, and troubles he encounters.”

As a result, Jeff has been able to be there for Chad during those difficult times to offer guidance and support. “Chad talks about my sons and I as his brothers,” said Jeff. “So, hopefully Chad feels like his family has gotten bigger through our match, and like there are more people in his life who care about him.”

Support like this makes a difference in kids’ lives. Your support provides more children with caring mentors who can change their lives for the better, forever.

Be the reason a child succeeds, today.

Learn more about becoming a Big at www.BigMentoring.org or make a donation HERE . 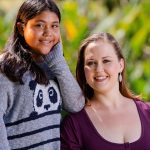 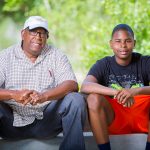