Bigs of the Year 2015: Stefan and Connie

Every year, we recognize a Big Brother and a Big Sister for their commitment and dedication to the program – both as mentors and also as advocates for the mission. We’re thrilled to announce the Central Texas Big Brother and Big Sister of the Year are Stefan Sinclair and Connie Anderson.

Stefan, Connie and hundreds of other “Bigs” in Central Texas are making a huge difference to kids in our community. Please help us congratulate (and thank!) them in the comments.

Stefan first got involved with BBBS in 2010, when he organized a team of coworkers to participate in Trudy’s Bowl for Kids. After that, he quickly became interested in the mission.

“As I learned more about BBBS, its mission resonated with me and I decided to volunteer,” he says. “Reflecting on my own life, I recognized how a number of adults had made positive impacts on me growing up, through activities, projects or just sharing stories and advice from life experiences. There’s no reason I couldn’t do the same!”

In 2012, he did just that, and was matched with his Little Brother, Miguel. Their first outing was spent eating hamburgers and asking each other a lot of questions. Since then, they’ve become great friends. Their outings consist of everything from bowling and playing chess to learning about how video games are made to running 5K races.

While there have been countless outings, one of Stefan’s favorite memories with Miguel is running in the Stand Up: Anti-Bullying 5K run.

“[Miguel] finished second overall, winning a medal and even being interviewed by local media,” Stefan recalls. “He’s participating in Marathon High now, training for his first marathon, which is outstanding!”

Today, Miguel is interested in going to college, becoming a professional soccer player – and he considers Stefan his best friend.

Big Sister Connie was matched with her Little Sister, Bonnie, more than seven years ago. During that time, they’ve had some great adventures, and even enjoy simple things like cooking spaghetti in Connie’s kitchen.

“It didn’t matter if we cooked at my condo, painted pottery or went strawberry picking; what mattered most was spending time together,” Connie says.

The Sisters have enjoyed so many activities, including going to see Shrek the Musical, creating a journal of the movies they’ve seen together and baking cheesecake (which is one of Bonnie’s favorite things to do). But perhaps the simplest thing is the most meaningful — just having those catch-up conversations when they get together.

“[I remember when] Bonnie asked if I would get a new Little after our match ended,” Connie recalls. “I told her I didn’t think so.  It would depend on where I was in my life, but even if I did, she would always be my Little.  I told her she was stuck with me until she decided otherwise… If it’s up to me, she’ll be stuck with me long after our official match ends.”

Years later, Little Sister Bonnie is less shy, more outgoing and appreciates the friendship and stability her Big Sister provides. When Connie told her about being chosen as Big Sister of the Year, Bonnie was thrilled. Clearly, these Sisters will be friends for life.

“I can’t imagine my life without Bonnie,” Connie says. “She IS my little sister.”

Thanks to Stefan and Connie — and hundreds of other volunteer mentors —  for their outstanding commitment to their Little Brothers and Sisters!

You can make a BIG difference for kids during Amplify Austin!News & Updates 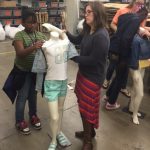