We always say that Ice Ball is “an evening that makes a lifetime of difference” – and we mean that in the literal sense. This year,  600 people attended, raising an amazing $340,000 for our kids. That number is enough to provide free mentoring services for hundreds of kids for an entire year.

We could never thank our sponsors, guests, volunteers or friends enough – all those special people who ensure this one night has a ripple effect in our community. And what a night it was.

After the Ice Lounge, the party continued upstairs, where the fiery Gayle Stallings of Fun Auctions got the crowd ready for fun! This was Gayle’s third Ice Ball, and she continues to shatter records and warm hearts.  Here, she is getting revved up with our bid spotters – who are real-life mentors here in Austin:

Together, the auction and “Fund A Friendship” donations raised an amazing $150,000!  Bidder paddles were up, and everyone was ready to start something BIG:

Having an awesome time at #iceball13 representing @chaoticmoon and helping @bigmentoring make some magic happen! pic.twitter.com/Rxc4vlCtMY

Our media friends were also there, including the Austinot, Michael Barnes, InFluential magazine, Austin Lifestyle, AW Media and TRIBEZA:

(If you went to the event, you also probably remember turning yourself into an animated GIF courtesy of PHHHOTO and My Event is the Bomb…)

Of course, the real star of the evening was former Little Sister Brooke Brock. She told her very personal success story of growing up in Austin, enduring a rocky childhood and ultimately achieving her dream of attending Texas A&M University. She turned and thanked her Big Sister Jessica for giving her the confidence and support to become the successful woman she is today. Her story even inspired a few folks to step forward and fund a friendship even though they didn’t make it to the event! Watch her story and video introduction from the event:

Next year’s Ice Ball will mark the event’s 10th anniversary – so stay tuned because it’s going to be cooler than ever!

Were you at the Ice Ball (or maybe last year’s)? What did you think? Let us know in the comments! 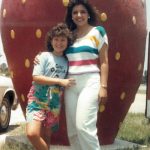