﻿A Legacy Built to Last: Celebrating 45 Years in Central Texas

Building on the past while looking to the future, Big Brothers Big Sisters of Central Texas celebrates its 45th anniversary this month. BBBS began with one man helping a few disadvantaged boys, grew into an agency that serves almost 1,000 children a year, and is preparing to reach new levels of service when the new BBBS Bennett-Rathgeber Mentoring Center is completed later this year.

BBBS became a reality in Austin in the early 1960s thanks to the work of several men who recognized the need for adult mentorship for boys. At first the group focused on boys without fathers, and then their efforts shifted to helping boys in Juvenile Court. Both early initiatives were hampered by not having an organization in place to recruit mentors and to work with big and little brothers once a match was made. As one early organizer put it, “You have to have continuous contact with both Brothers. Otherwise they lose interest.”

In the summer of 1970, a group of men who were concerned about the thousands of fatherless boys in Austin resolved to find the necessary support to begin a full time Big Brothers agency. Within a few short years the organization had grown to include a professional staff that worked with almost 300 matches a year from an office at St. David’s Episcopal Church at 308 E. Seventh St. The organization became Big Brothers Big Sisters of Central Texas in the 70s and moved to its current location at 1400 Tillery in 1985.

Though times have changed, the organization’s focus on helping children succeed has stayed the same, something Jamie Avila has observed first-hand. Jamie has served as a Big Brother, as a staff member, and as a current member of the BBBS board.

“It’s hard to believe it’s been 45 years. The agency continues to have a tremendous impact on the community. My “Little” is now a young man,” Jamie said, adding “It’s with a great sense of pride that I see him serving as an unofficial mentor to my own 12-year-old son. Mentoring can improve people’s lives through generations. It’s the ultimate win-win for everyone involved. To see this come full circle in my own life really demonstrates the far-reaching impacts of BBBS’ work.”

Andrea as a child, with her Big Sister “Bert”

Building upon this rich legacy of community impact will take the organization to the next level as BBBS prepares to make the move to a new, larger location this year – the new BBBS Bennett-Rathgeber Mentoring Center. Located in Rathgeber Village, on the site of the former Robert Mueller Airport and near other child-focused agencies, BBBS will finally secure a home specifically suited to the agency’s needs.

“The new facility will provide space to facilitate more client interviews, more adequately support agency staff, and offer room for match activities and recruitment events,” said Amy Jones. “As a former Big Sister, board member, and volunteer, it’s exciting to see the organization grow beyond my involvement and expectations.”

Board member and Big Brother Hector Perez predicts that the Mentoring Center will have an immediate impact on BBBS. “There’s a level of excitement and optimism regarding how we can raise the bar to take as many Littles as possible off our waiting list,” Hector remarked. “To have a place we can call home, a place where the community can come together to further and enrich our work, is really significant.”

“BBBS is all about being there to serve the community,” said Maria Barrett, a Big Sister and the marketing director for Padgett Stratemann & Co., a BBBS sponsor. “BBBS is an innovative organization that keeps tabs on how the community is changing and how the needs of Littles are changing. Only organizations that keep their eyes on their true mission have the sustainability to last 45 years,” Maria added.

“It’s going to be really exciting to have the new mentoring center finished,” Jamie concluded. “Austin is growing and so is BBBS. It’s exciting to imagine the opportunities we will have to partner with new businesses, organizations and families coming to the city. We live in one of the most exciting, progressive cities in America and I think our agency is going to reflect that well in the city we call home.” 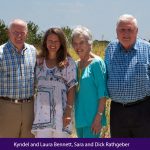 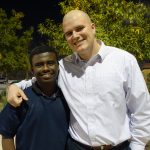