At first glance, Big Brothers Big Sisters’ Ice Ball Gala might appear to be simply a night of glittering ice sculptures, designer fashions, exotic trips and exciting auction packages. But at the heart of the event is the desire, the mission, to impact children’s lives for the better, forever. It’s a priority 2019 Ice Ball chairs Lauren Petrowski and Justin Poses are committed to, and one they want to promote within the Austin community.

“We have big shoes to fill,” said Lauren. “Every year Ice Ball gets bigger and has a bigger impact. So we are hoping this will be the biggest and best year yet. We will be happy to know the room is full of 800 or more guests who are ready to change children’s lives. We want people to be involved that night. We want them to hear about the mission and we want them to make a difference.”

“The cause is great,” said Justin. “I think anyone who goes to Ice Ball and experiences everything it offers… it’s eye-opening. I know it was for me.”

Lauren, a recent news anchor at Fox 7 in Austin, became involved with BBBS over 10 years ago when she signed up to become a Big Sister. “I was looking for a volunteer opportunity and BBBS sounded like the right fit,” said Lauren. “I was fortunate to have two very loving and supportive parents who were around my entire life. I know not every child is lucky enough to have that, or to have the opportunities I had, and I really wanted to provide that for someone else. I don’t think anyone can have too many adult role models in their life.”

Originally from Phoenix, Lauren first came to Austin as a student at the University of Texas. Upon graduation, she took a reporter position at a television station in Corpus Christi. It was there that she met Justin, who owns a real estate development company with locations in Corpus and Austin. After a year in the beach-side town, Lauren joined Fox 7 in Austin and the couple relocated. This was when she first connected with BBBS.

“I was a Big Sister for 5 years,” said Lauren. “When my Little went to high school we were not officially matched anymore, but we kept in touch.” Fast-forward to two years ago, after her Little graduated from high school. Lauren and Justin took their son to his first day of preschool and ran into Lauren’s Little Sister, who was working part-time as a preschool teacher.

“She is now in college and is working towards a degree in child development,” said Lauren. “It is amazing to see where she is today. She was raised by two wonderful grandparents, but having a Big allowed her to do things that she wouldn’t otherwise have had a chance to do. The biggest impact I probably had was on her emotional well-being. I came into her life at what can be a tough time for young people – those middle school years. I just tried to give her a chance to get out of her normal world and go to the movies, or get ice cream, and let her talk about her day.”

When her match ended, Lauren wanted to continue to be involved with BBBS in some way. “That’s when I recruited Justin,” she laughed. “I had always volunteered to host or emcee events. I’d been involved in fundraising for BBBS by forming work teams to participate in Bowl for Kids. Justin and I attended Ice Ball. Then I was asked to be on the Ice Ball Host Committee the first year it was formed, and I’ve been on it ever since… knowing one day we’d be asked to chair the event.”

“I’ve never been a Big,” said Justin, “but I’ve always tried to support BBBS in any way I can. Being a chair for this event has given me new insight into how things work. I knew about the importance of mentoring, but I was not in tune with all that goes into it and how much it impacts these kids’ lives.”

A new addition to the 2019 Ice Ball gala will help spread BBBS’ mission and message to an even wider audience. Designed to follow the main Ice Ball gala, The BIG After is a late-night after-party and celebration for guests attending the gala.  Tickets are also available for those who only want to attend The BIG After party. The BIG After will feature an open bar, live music and dancing with the band PDA, a raffle drawing, games, and an exclusive Kendra Scott experience.

But whether people attend the gala, the after-party, or both, Lauren and Justin want them to keep BBBS’ mission in mind. “My favorite part of Ice Ball is the Mission Moment, when we hear the story of a match and see the impact the relationship has had on both Big and Little…. and then to see the faces of those in the crowd as they come to experience and understand that impact,” said Lauren.

“Once you see how much mentoring impacts these kids,” said Justin, “it’s a no-brainer to want to support BBBS.”

Learn more and get tickets to Ice Ball 2019 and The BIG After at www.AustinIceBall.org 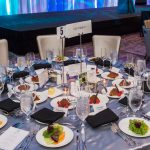